Review ~ ONLY FOR A NIGHT by Naima Simone 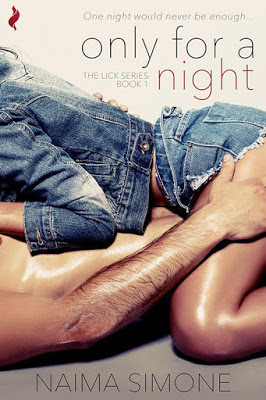 One night would never be enough...

Rion Ward fought hard to be free of the Irish mob life. Now, as the co-owner of Boston’s hottest aphrodisiac club, he’s traded crime for the ultimate sexual fantasy. But when the “good girl” from his past walks through Lick’s doors, he discovers that his unconsummated hunger for her never abated.

Widowed for two years from a man who felt that anything besides the missionary position was dirty, Harper Shaw is ready to move on. The first step to feeling alive again is sex. Hot, dirty, black-out-from-orgasm sex. And who better to provide it than the brooding, sexy, tatted bad boy-turned-man she’s known for years?

Rion, however, has one stipulation: He’ll be hers only for one night. One night to explore her every fantasy. One night to push her limits.  One night to introduce her to a passion that makes both doubt if it will be enough…


REVIEW
Only for a Night by Naima Simone is one of the books launching Entangled’s new Scorched imprint.  This novella is small, but packs some serious heat.

Only for a Night is a second chance love story with two characters who are completely opposites of each other.   At the age of sixteen, Rion Ward intervened when fourteen- year-old Harper Shaw was being picked on by a couple of jocks. An unlikely friendship was formed between a straight and narrow girl and an up and coming criminal from the streets.  Years after Rion pushes Harper away for someone more worthy of her, Harper hunts Rion down to give her the only thing he can give her.

Rion agrees to give Harper one night of passion and fulfill her dreams. From voyeurism to MMF action, Rion awakens the dormant vixen hidden within Harper.  When you’ve had a crush on or been in love with another person for years as these two have, one night isn’t nearly enough.

Only for a Night is a good start to the Lick series.  I’m looking forward to seeing what’s in store for Rion’s best friends and business partners, Sasha and Killian.  If they are anything like Rion, their stories promise to be just as hot and passion filled.

Naima Simone’s love of romance was first stirred by Johanna Lindsey and Linda Howard many years ago. Though her first attempt at writing a romance novel at age 11 never saw the light of day, her love of romance and writing has endured. Now, she spends her time creating stories of unique men and women who experience the dizzying heights of passion and the tender heat of love.She is wife to Superman—or his non-Kryptonian, less bullet proof equivalent—and mother to the most awesome kids ever. They all live in perfect, domestically-challenged bliss in the southern United States.