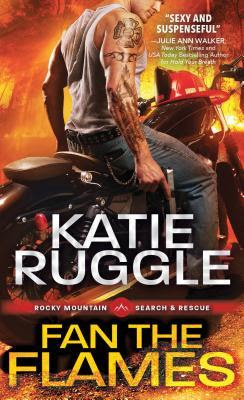 As a Motorcycle Club member and firefighter, Ian Walsh is used to riding the line between the good guys and the bad. He may owe the Club his life, but his heart rests with his fire station brothers...and with the girl he's loved since they were kids, Rory Sorenson. Ian would do anything for Rory. He'd die for her. Kill for her. Defend her to his last breath-and he may just have to.

Every con in the Rockies knows Rory is the go-to girl for less-than-legal firearms, and for the past few years, she's managed to keep the peace between dangerous factions by remaining strictly neutral. But when she defends herself against a brutal attack, Rory finds herself catapulted into the center of a Motorcycle Club war-with only Ian standing between her and a threat greater than either of them could have imagined.
REVIEW

Fan the Flames is the second full-length book in Katie Ruggle’s Search and Rescue series which focuses on the brotherhood of people who handle Search and Rescue in the small Colorado town of Simpson. Fan the Flames is a direct continuation from Hold Your Breath, the prior book so it’s best that you read On His Watch and Hold Your Breath, if you want to make sure you get an understanding of all of the relationships as well as some of the bad blood that exists between certain people.

In Fan the Flames, the focus is on firefighter Ian Walsh and gun store owner Rory Sorenson. Ian is an overly handsome firefighter who belongs in a calendar. Rory is an awkward young lady whose parents kept her isolated from the world in an underground bunker for most of her life until they killed themselves three years ago. Now Rory sales legal and not so legal guns to everyone in town including some morally questionable motorcycle gang members associated with Ian. Ian and Rory have been smitten with each other since they were kids but neither of them knew it. Now that Rory’s parents are gone, Ian has been her only friend and he is very protective of her. When someone makes several attempts to break into her home/business, he rushes to her aid as all hell breaks loose. Circumstances force Ian to pick a side between his motorcycle brethren and the girl that he has secretly loved for most of his life.

Katie Ruggle has done an excellent job of creating a quirky and lovable character in Rory. She is so clueless about people that it’s both sad and endearing. She is also tough and can handle a gun like an assassin. She has never had a boyfriend but is so enamored with Ian that she puts her fears aside and plunges head first into a passionate relationship with him. As for Ian, he is just as brave and fearless when it comes to Rory. He puts his life in danger on several occasions to protect her. In addition, they also kill a few people in the process. The action in this book was just flat out fun. Never pick a fight with someone with an arsenal at their disposal. Especially, when that someone has spent most of their life training for the zombie apocalypse.

**Received a copy from the publisher in exchange for an honest unbiased review.**

On His Watch ~ Review
Hold Your Breath ~ Review