Review ~ FROM FAKE TO FOREVER by Jennifer Shirk 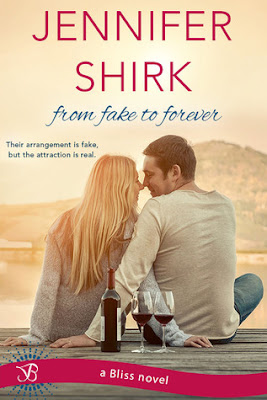 Sandra Moyer’s preschool is struggling, so when her sister suggests allowing a super-famous actor to research his latest role there, she reluctantly agrees. Except the actor turns out to be Ben Capshaw—a playboy who’s never serious, always joking around, and who knows zero about kids or being a parent. Case in point: his involvement in the untimely death of the preschool’s class pet…

Ben is enjoying teaching more than he thought he would, but that doesn’t mean he’s looking for a permanent position. Sure, he’s ready for more serious movie roles and less goofing off, but the buttoned-up, beautiful Sandra and her young daughter are more than he bargained for. Plus, Sandra still won’t trust him—what if it’s all an act, research for the role? As the lines between make-believe and reality blur, Ben will have to decide if love is worth casting aside the role of his life for a new role…that could last a lifetime.

Previously released as The Role of a Lifetime - (May 2008) and has been enhanced with new material.

REVIEW
Jennifer Shirk continues to be my go to author for sweet romantic reads.

Sandra Moyer is a single mom, running a struggling preschool with her sister Missy.  When Missy is approached about allowing a Hollywood superstar to do some research at their preschool, she doesn’t hesitate.  She does however, forget to tell Sandra about the arrangement.  Ben Capshaw is a tabloid favorite and has been dubbed as Hollywood’s most eligible bachelor.  He wants to change his image and do more serious roles.  His goal is to one day win an Oscar.  His stepping stone towards his goal is a lead role where he plays the father of a sick child.  The problem is Ben is a playboy and knows absolutely nothing about kids. He arrives at Storybook Land thinking his easy-going charm and good looks are going to get him everything he needs.  He just isn’t prepared to fall head over heels for the one woman in the world who seems to be immune to him and despises him to no end.

From Fake to Forever caught me by surprise with how many times I laughed while reading it.  The laughable moments took up well over half of the story with the back and forth between Sandra and Ben or simply Ben just trying to interact with kids.  Getting into the story, you can see how Sandra and Ben complement each other.  Sandra has serious trust issues that make her doubt Ben a lot of times. Wanting to prove he’s more than just a goofball, Ben actually allows Sandra to get close and see the real him.  I love watching Ben interact with the kids.  Sandra’s four-year-old definitely kept him on his toes.

If you’re looking for an easy-going, sweet, clean romance, From Fake to Forever is definitely a book to pick up.