5 Star Review ~ ONE WEEK TO SCORE by Kate Meader 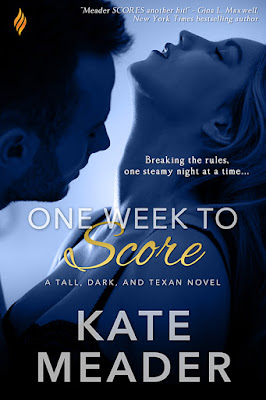 Olivia Kane’s wedding day has just imploded spectacularly. Shots lined up at the bar? Bring it. Hot stranger on the hook? Come on down. What this party does not need is six feet and change of home-grown Texas cockiness in the form of her brother’s best friend, the man who broke her heart seven years ago.

Flynn Cross won’t stand by while Liv finds sensual solace in the arms of a stranger, not when his own hard-for-her body is more than up for the task. For one week, he’ll make her honeymoon-for-one a sizzling party for two.

Breaking the rules, one steamy night at a time . . .

But the taboo they’re breaking is only the beginning . . . and Flynn’s part in Liv’s wedding debacle could bring about their end.


REVIEW
One Week to Score is the third and final book in Kate Meader’s Tall, Dark, and Texan series. While the book is a standalone read, readers were first made aware of a possible history between Flynn Cross and Olivia Kane in Taking the Score.  The glimpse given of those two promised to be a crazy enemies to lovers romance.  It seems when Kate sat down to write this story, she threw every trope she could think of into this story.  One Week to Score turns out to be a friends to lovers, enemies to lovers, best friend little sister, forbidden love romance all put together.  I feel like I’m missing one or two, but you get the picture.

From page one, I was a goner.  We get a glimpse into what the two were like as friends before tragedy struck and the distance between them became as big as Texas itself.  Fast forward seven years and it’s Olivia’s wedding day to the honorable congressman from Texas, Peter “Pecker” Whitehouse.  Unfortunately, the wedding doesn't take place and Flynn plays a substantial part in the “unhappy” day.  He didn’t punch anyone, but there was definitely a punch involved.

Needing an escape, Olivia decides to take her honeymoon for two and turn it into a no-holds-barred, any man with a heartbeat and is attractive will do for a week of hedonism. She just doesn’t expect the devil aka Flynn to follow her to Mexico and offer to be her sex slave.  It turns out Flynn and Olivia have had a thing for each other for years and this week in paradise will open their eyes to a possibility they never knew they had.

I’ve read all of Kate’s books except one.  Thus, I think that makes me a Kate Meader super fan.  One Week to Score goes down as my favorite Kate Meader book ever.  Seriously, it tops a cocky hot firefighter crushing on a moody chef.  I don’t know which character I loved more, Flynn or Olivia.  I love dirty talkers, and these two are among the best.  Notice, I said “two”.  Olivia has a mouth on her that rivals any sailor.  I loved her so much!  Flynn does do some questionable things in this book, but his heart is truly in the right place.  They have this back and forth banter, making this enemies to lovers story special and fun.  Their smexy times are hot.  But in the end, it’s their love for each other that’s just below the surface which makes this a perfect romance.

The Tall, Dark, and Texan Series:
(Click on the book covers for more information and/or to purchase from Amazon.)

You can read an excerpt of One Week to Score here.