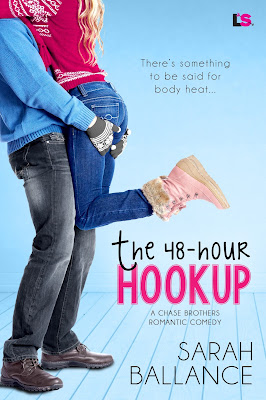 Who knew a sweaty photo would be good for business?

Now unwanted booty calls are coming in as fast as work orders, and Liam Chase needs to get away. Cue a job upstate. His new client is hot as hell, but he left NYC to escape attention, not to hook up with the city’s “Runaway Bride”.

But when she accidentally fells a tree on his truck, leaving them stranded in a winter storm with a chocolate-snatching raccoon, there’s something to be said for body heat.

Too bad neither can trust their explosive chemistry…

Liam voiced a string of profanity that would have made Sawyer proud. Raccoons were supposed to be cute and friendly. This fat, mangy, fanged thing with the crazy eyes hadn’t gotten that particular memo. “Do you have a broom?” he asked Claire.

“Yep. Right in that pantry beside the raccoon.” After a few more choice words, he asked, “Do you know how he got in?”

She edged to stand beside him, staying close. “If I knew of an opening for something that big to get in, don’t you think I would had done something about it? Besides, I think they can open doors.”

“Locked doors?” The woman was from New York City, where all things needed to remain locked at all times. Otherwise, even the shit that was nailed down would walk away.

“Why would the door be locked?”

He shot her a sideways look that backfired. Instead of getting his are you kidding me message across, he found himself drowning in an endless sea of blue.

He would have been content to drift there if not for the raccoon’s nasty hissing, so astutely fierce that it almost sounded like a joke. But Liam knew a raccoon could tear a person up. One thing he hadn’t rescued from his truck was a first aid kit, and along with his intention of keeping his appendages to himself, he wanted them intact. Which meant not sharing space with wild, angry animals. “Maybe you could lock it to keep raccoons out. I don’t know…that might be a start.”

She glared. “Because I absolutely expected this to happen.” The raccoon stared, less defensive now, then oh-so-epically-casually climbed first to a stool, and then to the counter, then ripped into a candy bar that had been lying there.

“Do you see that?” Claire said, edging to stand beside him. “He’s sitting there on his haunches looking me in the eye while he eats my chocolate.”

“The door isn’t open,” Liam said, trying damned hard not to sound amused. “Do they open and close doors? Is this the politest raccoon of all time?”

“No, I don’t think he is,” she said, turning toward Liam to give him an indignant stare. “Because as I previously mentioned, he’s staring right at me as he steals my food.”

Liam was sorely lacking in a smartass reply, probably because when she’d looked at him, her face tipped toward up his, he didn’t see the annoyance. He saw a delectably expressive mouth, and he wanted to taste it.

Probably as much as she wanted her chocolate.

Brantley Gilbert – Let it Ride
(Not on YouTube, but I’m told it’s on Spotify)

Dan & Shay – From the Ground Up
https://www.youtube.com/watch?v=ODRWKGIxB4M

The Chase Brothers Series:
(For more information or to purchase from Amazon, click on the book covers.)

My 5 star review of The 48-Hour Hookup will be posted later.


You can follow The 48-Hour Hookup Blog Tour here.