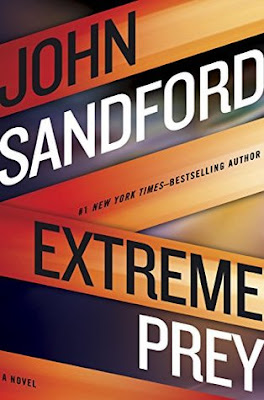 After the events in Gathering Prey, Lucas Davenport finds himself in a very unusual situation - no longer employed by the Minnesota BCA. His friend the governor is just cranking up a presidential campaign, though, and he invites Lucas to come along as part of his campaign staff. “Should be fun!” he says, and it kind of is - until they find they have a shadow: an armed man intent on killing the governor... and anyone who gets in the way.

REVIEW
Extreme Prey is the twenty-sixth book in the Lucas Davenport/The Prey series, featuring Lucas Davenport.  Lucas is a well-known and respected law enforcement agent that seems to always get his man.  This time, Lucas has gotten tired of all of the red tape and politics that comes with the job so he has quit and is working on remodeling his cabin when he gets a call from the Governor's office.  Lucas is asked to investigate a possible threat to Presidential Candidate Michaela Bowden.  As Lucas starts to look into several likely radical groups in Iowa, things start to heat up.

The most intriguing thing about how the investigation plays out is the fact that Lucas has to use his old connections and his reputation to make headway because he is no longer a cop.  He is still a very effective investigator.  The investigation leads him to some disgruntled farmers and an unlikely mother and son team.  Lucas gets into a fight, gets shot at, and even encounters a bomb.  None of that discourages him from trying to eliminate the threat.

I loved this book.  It is very timely and entertaining.  I could see this same type of conspiracy playing out in real life.  Everything from the politics to the assassination plot was very realistic and a little unnerving.  I look forward to seeing what happens next for Lucas Davenport.

It should be noted Extreme Prey is a standalone read.

**Copy received courtesy of G.P. Putnam’s Sons/Penguin Group in exchange for an honest and unbiased opinion.**