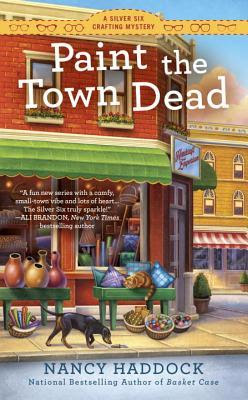 From the national bestselling author of Basket Case comes the second mystery starring the crafty and cantankerous Silver Six.

Leslee Stanton Nix—aka “Nixy”—thought moving to small-town Lilyvale, Arkansas, would be about as thrilling as watching paint dry. But keeping up with her retired Aunt Sherry and her troublemaking housemates—collectively known as the Silver Six—has proven to be as exciting as it is exasperating.

To kick off the grand opening of their craft shop, the Handcraft Emporium, Nixy and the Silver Six invite Doralee Gordon to teach a gourd painting class. Doralee’s spirit gets squashed when her ex crashes the class with his new fiancée, but things really get messy when the bride-to-be later turns up dead. Now it’s up to Nixy and the Silver Six to use their melons to find the killer—before someone else gets painted out of the picture...

REVIEW
Paint the Town Dead finds Leslee Stanton Nix, affectionately known as Nixy, along with her Aunt Sherry and Sherry’s housemates known collectively as the Silver Six opening their own folk art and craft gallery called The Handcraft Emporium.  The group plans on hosting a week of various art/craft related classes, leading up to the grand opening.  The first teacher is Doralee Gordon, who plans on teaching the fine art of gourd painting.  Things are going good until Doralee’s ex-husband along with his fiancée and sister show up during the class and make a big scene.  Not only does Ernie accuse Doralee of stealing his designs (never mind they haven’t seen nor spoken to each other in a long time) but they all are staying next door to each other at the same B&B.

A few days later, Ernie’s fiancée Kim is found dead in Doralee’s room, with Doralee’s sculpting tool stuck in her.  When Nixy’s beau, Detective Eric Shoar questions and links Doralee to the murder, the Silver Six step in to prove her innocence.  Nixy has learned her lesson when it comes to investigating, but when a Silver Six member says, “Might as well give in, missy.  If you don’t agree, we’ll just do it on our own.” she has no choice but to start looking into the case.

Once the group starts investigating, they make some surprising discoveries about Kim Thomason.  These discoveries create an interesting list of suspects.  While Nixy is doing a little investigation work, her personal life takes an interesting turn.  Of course, the Silver Six are there every step of the way.

In Paint the Town Dead, readers get to see a fearless Nixy as she confronts a killer, hoping Detective Shoar and the cops catch up.  Nancy Haddock has written a well-rounded mystery to keep readers on their toes and guessing until the big reveal.  To say the romance girl inside of me is getting a little happy is an understatement.  I can’t wait to see what is in store next for Nixy and the Silver Six.

The Silver Six Crafting Mystery Series:
(Clicking on the book covers will take you to Amazon.)