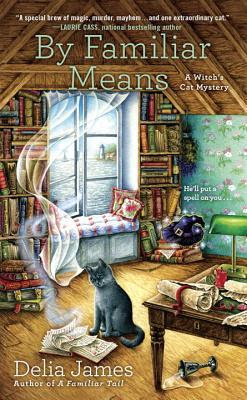 In the latest from the author of A Familiar Tail, a witch and her familiar find trouble brewing at a coffee house.

After discovering her mystical heritage—and being adopted by furry feline familiar Alistair—artist Annabelle Britton has decided to make picturesque Portsmouth, New Hampshire, her new home. Now, she can take the time to figure out her new abilities and welcome her grandmother, who is visiting Portsmouth, and her old coven, for the first time in thirty years.

But being a witch doesn’t magically put money in the bank. When she’s hired to paint the murals for a new coffee house, it seems like a wish come true. But then a series of spooky sounds and strange happenings convince the owners that their new shop is haunted. They want Anna and her coven to evict the restless spirit before the grand opening.

Annabelle is certain the haunted happenings at the shop are just hocus pocus. But when her search reveals hidden smugglers’ tunnels beneath the shop—and a dead body—Annabelle, Alastair, and the coven suddenly find themselves in a cat and mouse game with a killer...
REVIEW
By Familiar Means finds Annabelle “Anna” Britton embracing her special witchy powers. She’s truly happy in Portsmouth, New Hampshire, renting the nice cozy house she lives in, and making more friends.  When her grandmother, Annabelle Mercy Blessingsound Britton, affectionately known as Grandma B.B. comes for a visit to the town she left over 30 years previously, Anna is beyond happy.  The only thing missing is her having a job to support herself.  She’s offered the opportunity to paint a mural for the new Northeast Java coffee shop, by owners Jake and Miranda Luce.  But things are too good to be true.

Jake and Miranda do want to renovate the building they purchased for their new location, but that’s not the only reason they want Anna.  They’re sure the building is haunted and they want Anna to get rid of the ghost.  First problem, Anna doesn’t believe in ghosts. Second problem, Anna isn’t that kind of witch.  She can’t just cast a spell or use some hocus pocus to make a non-existent ghost disappear.  Anna’s witchy power is being able to walk into a place and get a vibe from it.  Anna believes in the Threefold law of: “Whatever you send out into the world comes back to you threefold.”  She doesn’t want to make the Luces anymore scared or nervous, so she agrees to read the building.  The biggest problem of all comes when Anna and the Luces start searching the basement and discover a dead body.  Now, the police are listing Anna, Jake, and Miranda as suspects.  It’s going to take Anna, her familiar, her coven, and her grandmother to get to the bottom of things.

Readers are treated to an in-depth look into exactly what Anna is capable of with her powers.  It was fun to watch Anna, Alistar, her coven, and Grandma B.B. come together to help discover who killed the man found in the basement and what exactly happened to him. There are a couple of surprises in store.  By Familiar Means will definitely have you smiling a time or two.

**Received a copy from Penguin Berkley Prime Crime and voluntarily reviewed the book.**

The Witch’s Cat Mystery Series:
(Clicking on the book covers will take you to Amazon.)