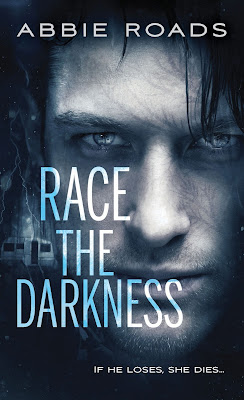 Cursed with a terrible gift
Criminal investigator Xander Stone doesn’t have to question you—he can hear your thoughts. Scarred by lightning, burdened with a power that gives him no peace, Xander struggles to maintain his sanity against the voice that haunts him day and night—the voice of a woman begging him to save her.

That threatens to engulf them...
Isleen Walker has long since given up hope of escape from the nightmare of captivity and torture that is draining her life, her mind, and her soul. Except…there is the man in her feverish dreams, the strangely beautiful man who beckons her to freedom and wholeness. And when he comes, if he comes, it will take all their combined fury and faith to overcome a madman bent on fulfilling a deadly prophecy.

REVIEW
As far as paranormal romance/suspense goes, Race the Darkness takes the cake.  It presents the concept of the ability to hear other people’s thoughts in an intriguing way. Clearly, this subject has been broached in millions of books throughout the years but I have never seen it looked at as such a painful affliction.  Couple that with someone else having the ability to see the future through their dreams and things become even more complicated.  The fact that this somehow is essentially a love story makes for some emotional reading.  It’s difficult not to feel sorry for the main characters.

For more than 25 years, Xander Stone has lived on the same property as his Dream Researcher father but they have not spoken.  This was a result of his father Alex’s loss of the only woman he truly loved, Xander’s stepmother Gale.  Alex was not a good father to Xander who really needed a father since his mother died when he was young and then his stepmother left when he was only seven years old.  To add insult to injury, Xander was struck by lightning ten years ago and cursed with the ability to hear other people’s thoughts. You would think that such an ability would be a blessing but the physical and emotional pain that it causes Xander is difficult for him to bare.  He is always angry and craves silence that he can’t obtain.  In addition, there is a voice of a woman who is being tortured that clouds his mind ever so often.  Her voice is so overwhelming that Xander generally has to get drunk in order to get away from it.

Without taking away from the suspense, I will tell you that one day Xander is unable to ignore the voice.  The part of him that he calls “The Ba***rd In His Brain” takes over and guides him to the place where Xander finds a young woman named Isleen Walker and her grandmother who have been held captive and tortured for years.  Isleen is the voice that’s been in his head for a decade.  The connection between Isleen and Xander will shock you almost as much as the fact that Xander could have possibly saved her from torture years ago.  They soon learn that their destinies were likely linked together from the beginning. That link will be tested when the cult that had been holding Isleen captive tries to get her back.

I really enjoyed Race the Darkness but I felt that there were a few things that happened that weren’t totally explained.  It wouldn’t be a big deal if I felt that the next book, Hunt the Dawn, would answer some of my questions but from what I have seen regarding the description of the book, I don’t think that it will.  Consequently, I will have to take away a few points for that.  However, I do intend on reading the next book.

**I voluntarily reviewed a copy of this book.**

The Fatal Dreams Series:
(Clicking on the book covers will take you to Amazon.)

You can read an excerpt of Race the Darkness here.