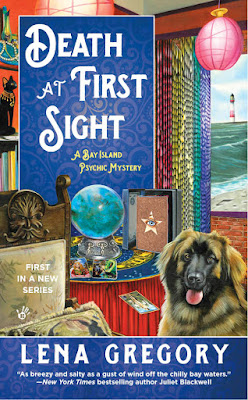 It doesn’t take a crystal ball to see that something’s not right on Bay Island...

Since she left her psychiatric practice in New York City to open up a psychic shop in her hometown on Long Island, Cass Donovan has given her fair share of readings to conflicted customers. But what she sees in Ellie Hawkins’ future doesn’t bode well.

When Ellie’s mother Marge publicly confronts Cass about the reading, the embarrassment makes her want to curl up and die. But when she later stumbles across Marge’s body—and is arrested for her murder—Cass is suddenly the star of Bay Island’s rumor mill.

Out on bail, Cass is determined to prove her innocence and save Ellie from meeting the fate in her unfortunate vision. But even with the help of her friends Bee and Stephanie, Cass will have to channel some serious sleuthing instinct to find the real killer…

Hi Lena.  Welcome to Read Your Writes Book Reviews.  How are you?
Hi! I’m doing well, thank you. I’m very excited to be here and to share the release of Death at First Sight.

Death at First Sight is your first book.  What has your writing experience been like?
It’s been amazing. The first half of Death at First Sight took me forever to write. I didn’t think I’d ever finish it. Then, one day, I decided I just had to finish it, so I stopped procrastinating and finished the rough draft in two weeks. After a very thorough round of edits, I sent it off to my agent.

She called to say Berkley was interested but wanted rewrites, so I did those and sent it back. I was actually on vacation with my family in Disney World, standing in the middle of the Magic Kingdom, when my agent called and said Berkley offered on my series. I was so excited!

That was two years ago. I’ve since finished all three books in the series and edited two of them. I’m now waiting for the edits on book three. And I can’t believe my release date is finally here!

That’s amazing you already have the series written.  What can readers expect from the book and the Bay Island Psychic Mystery series?
Cass Donovan has given her fair share of readings to conflicted customers. But what she sees in Ellie Callahan’s future doesn’t bode well.
When Ellie’s mother, Marge, publicly confronts Cass about the reading, the embarrassment makes her want to curl up and die. And when she later stumbles across Marge’s body—and is a suspect in her murder—Cass is suddenly the star of Bay Island’s rumor mill.
Cass is determined to prove her innocence and save Ellie from meeting the fate in her unfortunate vision.

Books two and three in the Bay Island Psychic Mystery series follow Cass as she tries to come up with new ways to generate income for Mystical
Musings. Owning a shop on an island that depends heavily on tourists is rough during the winter months, but Cass has a few ideas. In book two, Occult and Battery, Cass hopes to draw in more customers by hosting a murder mystery weekend, complete with a séance, in a supposedly haunted mansion.
But Cass begins to lose her spirit when her ex-husband shows up, along with his fiancée—Cass’s ex-best friend. Then, after one of the guests is found dead, a blizzard blows in, trapping everyone inside with a murderer.

Oh wow.  That’s going to be really interesting.  Tell me about Cass Donovan.
Although Cass runs a psychic shop on Bay Island, she doesn’t view herself as psychic. Her customers swear she can communicate with the dead, but she views what she does as more…scientific. Years of psychiatric training, combined with great instincts, allow her to “read” people with a remarkable amount of accuracy.

I find it interesting that Cass goes from having her own psychiatric practice to opening a psychic shop.  How did that come about?
Cass had a rough year. She lost her parents, a patient, her best friend, and her husband. When she returned to Bay Island to see to her parents’ arrangements, she decided to stay. Though she still enjoyed helping people, she no longer wanted the responsibility of being a psychiatrist. When she was in high school, she used to make money for college by offering “readings” to the tourists, so she returned to that, just on a larger scale.

I’m a romance girl.  I love having a little romance or potential romance in my cozy mysteries. Is there any of that in this book?
Well, even though Cass isn’t yet ready for a relationship, there is a very handsome stranger in town. Unfortunately, she doesn’t trust him, with good reason.

Oh.  That’s very intriguing.  Was there anything about Death at First Sight that actually surprised you?
Actually, all of it pretty much surprised me. I didn’t plot it out ahead of time, so I’d just write and see where the story took me. There was more than one time I was surprised by a twist I hadn’t foreseen.

That is really amazing!  What do you love about Cass?
I love her desire to help others. No matter what happens, even at risk to herself, she always wants to help people.

One scene definitely comes to mind.  There’s a big dog on the cover.  Who is he and does he help at all with the mystery solving?
Beast is a Leonberger Cass sort of inherits. She’s never owned a pet before, not even as a child, so a giant dog is a bit much for her to handle. He doesn’t help solve the mystery, but he definitely gets into his fair share of trouble.

Are any of your characters inspired by family or friends?
The characters themselves were not inspired by anyone I know, but the relationships between them were inspired by my relationship with my two best friends, the kind of friends that stick by you no matter how much trouble you get them into.

The Bay Island Psychic Mystery Series:
(Clicking on the book covers will take you to Amazon.)

Click here for my review of Death at First Sight. 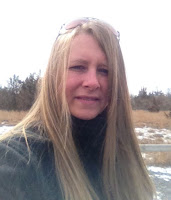 You can follow the Death at First Sight blog tour here.