Review ~ FOR THE BEAR'S EYES ONLY by Kathy Lyons 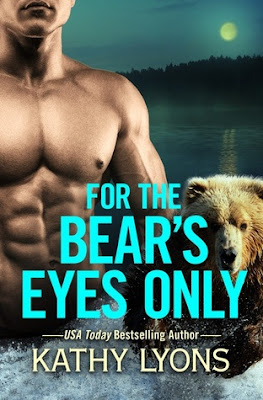 BEAR ON THE PROWL

Life as Alan Carman knew it is over. After he was captured and tortured by a mysterious enemy, the lawyer's latent grizzly-shifter DNA was triggered. The old Alan is gone, and in his place is a terrifying vicious beast that lives and breathes for revenge. He will track down the person who did this to him-and it'll be the last thing he ever does.

Tonya Kappes refuses to let Alan run headlong to his death. A bear-shifting deputy-and the Gladwin Clan's beta-Tonya faces Alan with one weapon: the love that's lingered between them since they were kids. But the idealistic man she knew has changed...into something raw, primal, and unbelievably sexy, igniting every lustful cell in her body. And, if Alan can't learn to love the beast inside himself, maybe he can love the animal in her . . .

REVIEW
I’m a huge fan of Kathy Lyons’ Grizzlies Gone Wild series.  I devoured books one and two. It should be noted that in my opinion, For the Bear’s Eyes Only is not a standalone read. Book two, License to Shift must be read first.

For the Bear’s Eyes Only picks up about a week after License to Shift ends.  The story finds Alan Carman still reeling from the atrocities inflicted on him and going unnoticed by those who were supposed to love and care for him.  Alan is full of hatred and rage and set on revenge.

Tonya Kappes feels horrible for the things that have happened to Alan.  She feels she has failed him as a cop and as a friend.  She wants to be there for him as a friend and needs to be there for him as more.  Part of her problem is that she has known Alan has been in love with her since they were kids.  She has never shown him any interest, choosing to throw herself at his older brother for the power he possessed.  As Beta of the Gladwin Grizzly Clan, she answers to the Alpha, Alan’s brother, and the community.  But in order to save the man she loves, she’s willing to disobey all orders.

Alan and Tonya have a back and forth tug of war going on.  After everything, he doesn’t trust her.  But she’s the one person who understands him and she will fight tooth and nail to save him from himself and the world.

I loved being able to go back and get glimpses of these two throughout the years.  My heart broke for Alan whose life was forever changed and who had to endure the consistent thoughts and feelings of not being good enough or accepted.  I loved Tonya for loving Alan and fighting for him to love her back.

The culmination of the suspense part of this series takes place in this story.  The action is easy to follow and deserves your full attention.  The end result is shocking, but at the same time compelling, showing what kind of man Alan is.  I loved watching him claim his independence and stand up for himself.  He lost his squeaky clean Brooks Brothers persona and gained a hard edge.  Yes, he probably is still wearing Brooks Brothers, he’s refined like that.  But he ultimately gained a true respect for himself.

I have to be honest, it did take me awhile to actually fall in love with For the Bear’s Eyes Only.  The story is dramatically different from The Bear Who Loved Me and License to Shift.  I knew the story was going to be heart-wrenching.  I just wasn’t expecting it to be dark.  I applaud Kathy Lyons for writing three very different stories and knowing that Alan needed to go to the dark side and return, in order to have everything he ever wanted.

My fingers are crossed that this isn’t the end of the series.  After all, Tonya does have a couple of brothers.

**Received a copy from Forever Yours and voluntarily reviewed the book.**

The Grizzlies Gone Wild Series:
(Clicking on the book covers will take you to Amazon.)

The Bear Who Loved Me ~ Review
License to Shift ~ Review

Kathy Lyons is the wild, adventurous half of USA TODAY bestselling author Jade Lee. A lover of all things fantastical, Kathy spent much of her childhood in Narnia, Middle Earth, Amber, and Earthsea, just to name a few.  There is nothing she adores more than turning an ordinary day into something magical, which is what happens all the time in her books. Winner of several industry awards including the Prism-Best of the Best, Romantic Times Reviewer's Choice, and Fresh Fiction's Steamiest Read, Kathy has published over fifty romance novels, and she's just getting started. Check out her latest news at KathyLyons.com.