Review ~ INTO THE BLUE by Chanel Cleeton 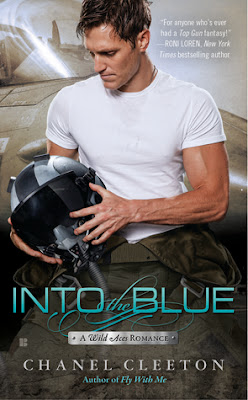 From the author of Fly with Me and the Capital Confessions Novels comes the newest in the sexy Wild Aces Romance series.Eric Jansen—call sign Thor—loves nothing more than pushing his F-16 to the limit. Returning home to South Carolina after a tragic loss, he hopes to fix the mistake he made long ago, when he chose the Air Force over his fiancée.Becca Madison isn’t quick to welcome Thor back. She can’t forget how he shattered her heart. But Thor won’t give up once he’s set his sights on what he wants—and he wants Becca.Thor shows Becca that he’s no longer the impulsive boy he used to be, and Becca finds herself irresistibly drawn to him. But will Thor be able to walk away from his dream of flying the F-16 for their love or does his heart belong to the sky?

REVIEW
Into the Blue is the second book in Chanel Cleeton’s Wild Aces series, but it is truly standalone read.

In Fly with Me, the Wild Aces Squadron suffered a loss.  Into the Blue finds all the guys and their significant others dealing with the fall out and trying to move forward.  However, two months after the accident, Eric “Thor” Jansen is finding it hard to do the job he once loved. When a chance encounter with Becca Madison has him questioning his choices, he returns to his hometown to regroup.  The same hometown he ran away from ten years ago.  The same hometown he hasn’t been back to because he didn’t want to deal with the ghosts of the past and the girl he once wanted to promise his life to.

Into the Blue is a second chance love story of two people who never got over each other.  In the ten years since they last saw each other, Eric and Becca are still carrying the emotional scars and baggage of the past.  In some ways, they have each grown as people, but in some ways they haven’t.  But one thing that hasn’t changed is the love they felt for each other.

The story is told in dual first person point of views.  You’re able to sit on the characters’ shoulders and get a front row seat to their thoughts as they come to terms with their changing feelings.  Into the Blue deals with PTSD and learning to overcome it.  You get to watch Eric and Becca change their viewpoints and thoughts on what they want out of life. What they’re able to gain and change for love.

I found Into the Blue to be a really good story.  It wasn’t heart-wrenching like Fly with Me. It didn’t pull me in emotionally, but it was a solid second chance love story.  I loved watching Eric and Becca not lose themselves to love, but be open to change for the love they wanted.

**Received a copy of the book from Berkley and voluntarily reviewed.**

The Wild Aces Romance Series:
(Clicking the book covers will take you to Amazon.)

Fly with Me ~ Review