Review ~ MORE THAN A LAWMAN by Anna J. Stewart 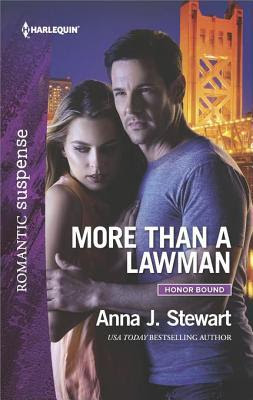 A journalist and a sexy detective team up to catch a serial killer in USA TODAY bestselling author Anna J. Stewart's new romance!

Haunted by the death of her childhood friend, journalist Eden St. Claire has dedicated her life to catching serial killers—and she's always done so alone. But when the lethal murderer Eden is tracking puts her in danger's crosshairs, she agrees to accept protection from longtime friend Detective Cole Delaney.

Cole has secretly carried a torch for Eden for years. She might not want to let anybody in, but the thought of losing her is unbearable. Passions flare as the threats intensify. Can Cole convince Eden to break her own rule to never fall in love…before the killer snuffs out their happily-ever-after?

More Than a Lawman is the first book in Anna J. Stewart’s Honor Bound Series.  It’s equal parts romance and suspense.  It’s the story of journalist Eden St. Claire and Detective Cole Delaney.  When they were younger, they lost a friend at the hands of a killer.  To make matters worse, Eden eventually lost both of her parents in a car accident.  That left her with just her older brother who was Cole’s best friend.  To add insult to injury, while Cole and her brother were in the military together, Eden’s brother was killed and Cole swore to always look after her.

Now, several years later with most of the past behind them, Cole is a detective and Eden is a journalist.  She devotes her life to shining a light on cold cases and finding justice for victims, to atone for the guilt she feels regarding her role in the death of her childhood friend.  On the other hand, Cole has spent most of his life pining after Eden while she has been totally oblivious.  Everything changes when Eden provokes a serial killer and he puts her in the middle of his demented scheme.  Eden is no shrinking violet so Cole has no choice but to keep her close if he wants to make sure that she stays alive.  That’s not something that Eden accepts lying down.  She has no interest in sitting on the sidelines while a killer could get away.  Things get more complicated when it appears that the killer may also have a connection to the murder of their childhood friend.  The plot twists become much more intricate as things move forward.

Eventually, Cole can no longer hide his attraction to Eden and his brutal honesty throws her for a loop.  She has promised herself not to let anyone into her heart because she has already lost everyone that she ever loved.  Her and Cole are great for each other but Eden spends a lot of time trying to deny her feelings.  She is very stubborn but it’s easy to understand why she keeps her heart so guarded.  Cole is a great friend and he doesn’t hesitate to cater to all of Eden’s needs both in and outside of the bedroom.

Although I truly enjoyed this book, Eden was somewhat difficult to like in the beginning. Her habit of running into danger got old very fast.  I’ve seen plenty of characters that have a deathwish but she seemed to be much more complicated than that.  Man Than a Lawman was suspenseful but it wasn’t entirely unpredictable.  I would like to see how things progress in the next book because Eden’s two friends were equally intriguing and appear to have their own baggage.

The Honor Bound Series:
(Clicking on the book covers will take you to Amazon.)