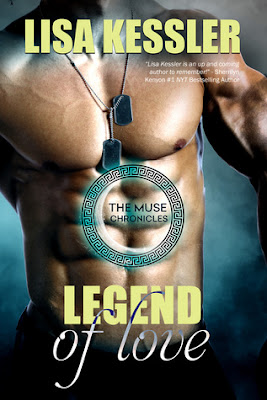 The Prophecy - “Every generation the nine daughters of Zeus are reborn, and with their rebirth are also nine Guardians. They will be marked by the gods, and given gifts to protect his treasure. Their abilities will only be unlocked when they find their muse.”

Callie O'Connor's life has never been the same since the Muse of Epic Poetry came alive inside of her. Now she's on the other side of the country, working as civilian psychologist for the Navy, and leading her Muse sisters in their quest to reopen the Theater of the Muses.

But nothing could have prepared her for Hunter Armstrong. He's a Navy Seal, driven, confident, and dangerous. And he plans to do more than just protect her.

The gods couldn't have picked a better Guardian. But as Hunter soon discovers, Callie has some skeletons of her own in the closet, and loving her could lead to his destruction.

She gripped the sides of the board. “Now what?”

“We wait for the right wave.”

She tried not to stare into his eyes and focused on the beach in front of her, instead. “Why was it so important that you got me out here today?”

She turned to look at him. She couldn’t help it. “You’ll have to try harder than that to fool a therapist.”

He chuckled, his smile stealing her breath. She never should have allowed herself a glance.

Another wave passed by while Hunter steadied her board. His big hand covered hers on the edge. “All right. Truth is, you have to trust me out here. And if you can trust me, then I figured I could trust you not to think I’m nuts and send a report to my commanding officer.”

“I’m not your doctor anymore.”

He nodded, glancing back over his shoulder. “True.” His voice dropped. “Get ready. This is the one.”

Before she could respond, he released the board, and the swell of the tide propelled her forward.
He gripped the sides of the surfboard and hopped up to her feet. For a split second, she thought she had it, then her balance faltered. She squealed as she fell backward into the water.

Strong hands caught her waist, pulling her to the surface. She instinctively held onto his biceps. She’d never intended to get this close to him.

Hunter scanned her face. “Are you alright?”

The adrenaline rush swelled in her limbs, and the muse inside of her fed on it like an addict. Callie’s feet didn’t touch the sand, the ocean lifting her so she was eye to eye with this Navy SEAL. Her Guardian.

She tipped her head back and laughed, the release, the joy of it, overwhelming her. She felt alive for the first time in longer than she could remember.

She filled her lungs with sea air and grinned. “I’m so much better than all right.”

For the next hour, she fell off that board more times than she could count. Each time, Hunter caught her before the waves could drag her into shore and pummel her onto the beach.

More determined than ever, she waited for the perfect wave, then pulled her feet up underneath herself and hopped up. She kept her weight forward, knees bent, and the wave pushed her toward the shore. Her balance shifted, her arms out, her entire body one with the swell of the ocean. She jumped off onto the sand and let out a primal scream to the sky.

Hunter walked out of the waves, and without any pretense, he wrapped her in his arms. She looked up at him, her eyes searching his.

He bent his head lower, his voice a raspy whisper. “I’ve never met anyone like you.”

Her pulse pounded in her ears like a bass drum. She ached to surrender, to taste his lips and run her hands over his body. But as hungry as the muse was for epic emotions, Callie caught herself and stepped back. Hunter’s smile faded, but he didn’t say anything, just picked up the board.

She followed him up the beach, wishing things could be different. He was definitely too vulnerable after his last mission. The last thing he needed was her.

He laid the surfboard down next to the other one and unzipped his wetsuit. “Sorry. I guess I got caught up in the moment.”

She sighed. “Seriously, it really is me. You’re amazing. I’m doing you a favor by keeping my distance. Trust me on this.”

He shook his head. “For a shrink, you have a pretty low opinion of yourself.”

Callie chuckled and smiled up at him. “If it were just me, I’d be all over you.” She lowered the zipper on her wetsuit and slid her hand inside over her heart. “It’s what’s in here that I’m protecting you from.”

He scooped up both boards. “You know that makes no sense, right?”

She shook her head. “Well, we still have a lot to talk about.”

He put the boards in the back of his SUV and handed her a towel. “Let’s get showered, then, and I’ll buy you a coffee.”

She nodded and clutched the towel. “Race you there!”

She was already sprinting across the sand before she got the last words out.

He followed close behind, laughing, the sound making her heart ache. She’d been through this before. The muse would eventually tire of him. No more adventure, no more interest, and she’d bolt.

At the last second, Hunter raced past her and hit the button on the shower. Water sprayed his back, rolling down his chest. “You didn’t think I’d let you win, did you?”

Callie crossed her arms, trying not to grin. “You were such a gentleman in the ocean, I just figured you’d be one on land, too.”

He sobered, hunger in his eyes. “Just because I didn’t cop a feel all those times you fell off that board doesn’t mean I didn’t want to. I’m no angel, Callie.”

Desire pooled low in her belly. She swallowed, unzipping the wetsuit the rest of the way. “We need to talk first. Then you’ll understand.”

He pulled off his wetsuit and turned around to rinse it out. Oh shit. He looked even better in those board shorts than she’d imagined. His calves were chiseled, and his ass… Damn. His shorts hung low, teasing her with the two indents just above the waistline. He turned around to face her again, and she forced her eyes off his chest and up to his face.

“No matter what you tell me—” his lips curved into a sexy smile “—I’ll still want you.”

“But you’ll at least understand why it’s a bad idea.”

He tipped his head back under the water. “Oh, Doc…” He ran his hands through his hair and met her eyes again. “I’m the king of bad ideas.”
REVIEW
Lisa Kessler helps readers learn a little about Greek mythology with her Muse Chronicles series.

Legend of Love is the second book in the series and is a standalone read.  The story features Callie O’Connor, a Navy Psychologist, and Hunter Armstrong, a Navy SEAL.  The two meet when Hunter is sent to her to deal with the outcome of his last mission and get cleared to return to duty.  Their session doesn’t go so well, but their attraction to each other is clear.  It isn’t long before they figure out their destiny is to be together.  Callie is the Muse of Epic Poetry and the leader of this generation’s muses.  According to legend, Hunter has been marked to protect her and in doing so has gained a remarkable ability to add to his SEAL training.

“I’m a warrior, and I’ll defend you with my life.”

Hunter and Callie are a perfect match.  They each have family baggage that they help each other to process.  “I don’t want to clip your wings.  I want to fly with you.”  They understand each other like no one else ever has.  While Callie tries to put up walls to protect Hunter, he refuses to be dissuaded.  “You don’t give up do you?” “Never.”

Lisa has written a story with humor, amazing likeable characters, sex and as mentioned a little suspense.  Legend of Love is definitely a book you aren’t going to want to put down.

The Muse Chronicles Series:
(Click on the book covers for more information and/or to purchase from Amazon.) 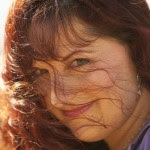 When she's not writing, Lisa is a professional vocalist, performing with the San Diego Opera as well as other musical theater companies in San Diego. You can learn more at http://Lisa-Kessler.com.