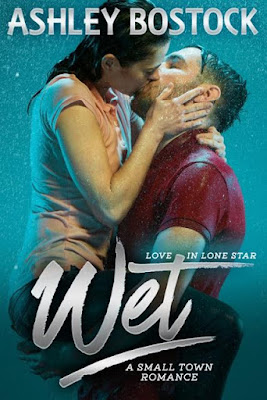 I’ve always been, Miranda Phillips, the town pariah. Growing up with neglectful parents, having sought attention from all the guys that were willing to give it to me, I wasn't the most well-behaved kid in Lone Star. Killing an entire pond of Mrs. Potter’s fish when I was sixteen is one of many juvenile delinquent acts I’ve done in my past.

But now I am Lone Star’s reporter, only reporter and I’ve come a long way from being that lost, troubled girl, even if most of the town still judged me for it. I don’t allow anyone to get in the way of what I want. Including Ryan John. So when I corner him in the dark hallway and get him to succumb to the sizzling attraction between us, I know I’m playing with fire.

Even though I’ve successfully avoided her for two months, I haven't forgotten how she tastes or what she feels like in my arms. And when I get sent a mysterious letter from some company wanting to buy my thousand shares of water rights that have been in my family for over a hundred years, I’m convinced that there is no one…err, better equipped, to help me than Lone Star's only reporter, Miranda Phillips.

I know how desperately she wants me and this letter gives me all the reason I need to spend one night with the girl from the wrong side of town. One night in exchange for her tight investigative skills. And believe me, she's tight, in more ways than one. One night. Because Miranda is trouble and being on the city council, as well as guardian to my younger brother and sister, means I can't afford trouble.

Even if it comes packaged just the way I like.

Yes, I was more attracted to Miranda than any other female I had ever come across, but that didn’t make her girlfriend material. How do I explain all of that to a thirteen-year-old girl? Besides, even though I had a strict no-dating rule for their young ages, I didn’t want to hurt Brianna’s feelings by allowing her to think the boy she was so infatuated with didn’t share her feelings. She was my sister and as cute as she was now, she was going to grow up and become a real heart-breaker. I was fucked.

What in the hell do I do? I lifted my head and asked her to sit down.

“Listen to me, okay? As you can see, Miranda is very beautiful. I’m a guy, I take notice in that because it’s natural so that’s why I look at her that way. Adam probably thinks you’re beautiful too because you are, okay?”

“You’re thirteen, Brianna! It doesn’t matter. Look, I’m sorry. Yes, okay. If he was looking at you the way I was looking at Miranda, then yes, he likes you.”

“Soooo, you like Miranda, then? Is she going to be your girlfriend?”

Not much later. Was I seriously having this conversation with my thirteen-year-old sister?

Ashley Bostock was born and raised in Colorado where she currently resides with her husband, two children, her dog and two cats. She loves reading, writing, and music and is always trying to find more time in the day to incorporate all three.

Seeking an outlet and pursuing her life-long passion for writing, she began composing her first novel in late 2013. She has traveled all over the world, but still has an extensive list of places she would love to visit. Anywhere near a sky-blue ocean will always be at the top of that list.

She carries a Bachelor’s Degree in History with a concentration in Elementary Education from Metropolitan State College of Denver. While she loves children, she now fears teaching, which probably has something to do with being a stay-at-home mom.