Guest Post ~ I SHOULD HAVE SAID YES by J B Glazer 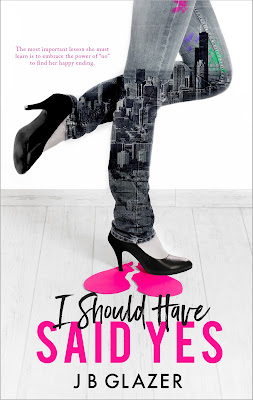 Blogger extraordinaire Tara Winters has always regretted saying no to D. J. Parker. She vowed never to repeat her mistake, and her “yes” dating pact was born. After meeting countless Mr. Wrongs, she’s seriously considering her friend Andy’s drunken marriage proposal. Then Andy meets Natalie, and Tara finds herself competing for his affection. She must decide if it’s love—or a game to win. After each outrageous date Tara shares advice with her followers, but embracing “no” just may be her key to happiness.

J B has stopped by to introduce us to the protagonist from her latest Chick Lit novel, I Should Have Said Yes. Meet Tara Winters: serial dater, blogger, interior designer, master’s student, and sometimes screw up. (With all of that on her plate, I guess we can cut the girl some slack)! She’s always regretted saying no to love interest D. J. Parker and vowed never to repeat her mistake. So her “yes” dating pact was born. Hence, Tara goes on A LOT of dates. She’s here today to share her top 5 pieces of dating advice. Take it away, Tara!

5. Always have an exit plan
Let’s face it, some dates aren’t going to go well. Or perhaps your date is into you but you just aren’t feelin’ it. You need an exit strategy so you can leave. Pronto. These should be planned in advance so you aren’t under the gun in the heat of the moment. My friend Jordan and I have an agreement. We’ll text each other 911 if we are in need of rescuing. The other party has to immediately call and provide an excuse so we can leave gracefully. I’ve needed to use it on a handful of occasions. Interestingly she has not. But I paid her back in spades by scoring her an invite to a local celebrity fete. My blog post on that night is still my most trafficked one! So we’re even

4. Never lie to land a date – it will always come back to bite you
We’ve all been there – embellished the truth a bit to make ourselves seem more likable. Don’t do it. Seriously. Because the truth always comes out. And let’s face it: lying is no way to start a relationship. My coworker signed me up for one of those online matchmaking sites. I know she had good intentions, but if I wanted to do it don’t you think I would’ve of? It’s not like those things are some sort of secret. It really pissed me off, but I’ve moved on. Anyway, I was going to delete my account but someone already contacted me. And because of this yes dating pact I felt like I needed to go through with it. We made arrangements to meet up and I couldn’t find him. Perhaps it’s because he looked NOTHING like his pic. Did he think I wouldn’t figure it out? This is why I don’t do online dating. People make things up, hiding behind the comfort of their screen. But therein lies the problem. Once you meet face-to-face, the gig’s up. Lucky for Curtis (that’s his name) we are still friends. He’s a good guy but just needed some guidance. I cleaned up his profile and now he’s dating someone. Glad it worked out for one of us!

3. Don’t underestimate the importance of waxing/shaving
Ladies, I realize this is a given. Except for my freshman year roommate. I’m still scarred about it – but I digress. So I’m talking to you men out there. Who decided that it’s not OK for women to have body hair but it’s perfectly normal for men to look like animals? If they had to endure one bikini wax, I tell you it would never happen again. I bring this up because it has an impact on intimacy. I went out with an adorable guy, but when I discovered he was one with the bear I had to draw the line. We are talking an abundance of hair everywhere. Except his hands. I would’ve noticed and cut that right off from the start. I think I’m a tolerant person, but it’s just something I couldn’t get past.

2. Don’t assume he’s payin’
I think it’s nice when a guy pays, but I don’t expect it. My rule of thumb is whoever did the asking should do the paying. But you just never know, so always have cash or a credit card on you. You’ll also need it to get home, especially if you want to bail. Remember rule #1?! I know this seems obvious, but it’s happened to me. A guy asked me out to a very nice restaurant. I normally wouldn’t agree to such an expensive place on a first date, but it was Raven. That place has a six-month long waiting list and I was dying to try it. I brought up said fact about how it’s pricey, tactfully of course, but he assured me he had a connection. One of the investors was his friend, or something. So I agreed. At the end of the meal his connection didn’t come through. Go figure. And he didn’t have enough cash to cover the bill. Who doesn’t bring a credit card in this day and age? Now you see why I need to cover off on this one. So I had to pay. And boy was I pissed. We met for brunch the next day so he could pay me back. Funnily enough the brunch place was cash only, but I guess he left that at home. So I paid for the meal again. At least I got my check to cover dinner. Couldn’t get to the ATM fast enough to cash it. I logged in my steps that day – LOL!

1. Embrace yes!
Warning: this may get a bit sappy. But I want you all to learn from my mistake. I started a dating pact because I didn’t say yes when I had the chance years ago. And I’ve regretted it ever since. It’s a terrible burden that I carry with me. So never be afraid to say what’s in your heart. Just go for it and have faith that things will work out as they’re supposed to. So often we say no because we are scared of the outcome. Don’t let fear rule your decisions. Take a leap of faith. Sometimes things won’t work out as you planned, but the unexpected path could just be the one you were meant for all along.


Purchase I Should Have Said Yes from:
Amazon | Barnes & Noble | Goodreads