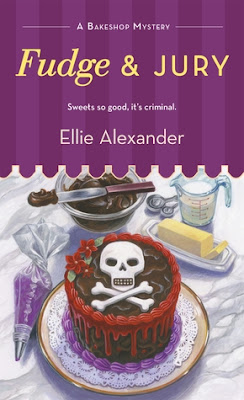 It’s almost spring in Ashland, Oregon, and the town is preparing for the Shakespeare and the annual Chocolate Festival. Business is cookin’ at Torte, and the store is expanding as Jules’ team whips up crèpes filled with mascarpone cheese and dark chocolate. Torte stands a chance of being this year’s confectionery belle of the ball! Life couldn’t be sweeter—unless murder taints the batter.

Evan Rowe, of Confections Couture, makes a chocolate fountain that would put Willy Wonka to shame, and his truffles are to die for—literally? Yes, the world-renowned chocolatier has just turned up dead…right after sampling a slice of Jules’ decadent four-layer chocolate cake. Now all eyes are on Jules as she tries to find the mysterious ingredient in her own recipe. Can she sift out the truth before another contestant bites the buttercream?
REVIEW

Juliet “Jules” Montague Capshaw is back in Fudge and Jury, the fifth book in Ellie Alexander’s A Bakeshop Mystery series.  This installment of the series finds Jules and her mother Helen participating in the annual Chocolate Festival that is being held at the Ashland Springs Hotel.  They are also mulling over the idea of expending Torte, their family bakery/restaurant.

As the Chocolate Festival is about to start, Jules and her mother have a run in with Evan Rowe, the famous chocolatier and owner of Confections Couture.  It seems Evan isn’t happy with the “little people” being showcased at the festival alongside himself and his company. After belittling and embarrassing an up and coming baking entrepreneur, Evan turns his sights on Torte.  To pacify Evan, Helen offers him one of their signature desserts, chocolate pasta topped with a cream sauce, pistachios, and fresh raspberries.  To their surprise, Evan is horrified and informs them that he’s allergic to nuts.  They then offer him a sample of their chocolate cake.  Evan eats it up and then proceeds to have a severe allergic reaction and dies.

Having watched a man take his last breathe is really hard on Jules and she wonders who would have wanted Evan dead.  The problem is  Evan was a tyrant and not well liked.  Jules and her friend Lance, the artistic director of the Oregon Shakespeare Festival, set out to get information and catch a killer.

Ellie has once again written a page turner.  Her cast of characters are all likeable and you can’t help but want to be apart of the book, just to know them.  As I said, there is definitely a long list of suspects who had some issues with Evan.  But Jules and Lance soon learn things are not as they seem with Evan and those he knew.  The story had me guessing up until Jules herself figured it out.  I can say I definitely learned something about cooking that I never knew before.  Of course, Jules and Lance find themselves in a bad situation, but the way they get out of the sticky situation is classic.  I’m seriously crushing on Lance.

Fudge and Jury is a standalone read, but I love reading this series.  I can’t wait to devour the next book.