Review ~ TAKING CARE OF THE TARGET by Cindi Madsen 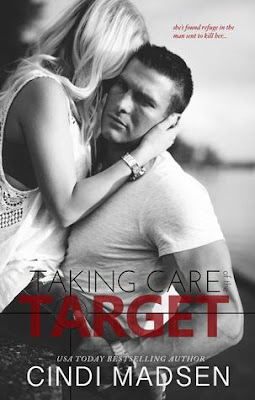 Vince DaMarco always liked Cassie, the shy waitress who works at the restaurant that serves as a front for his mob boss uncle. Unfortunately, she witnesses a back alley hit, and while fleeing, she’s struck by a truck. Now she’s at the top of the hit list. Desperate to stop anyone who’d draw out Cassie’s death, Vince volunteers to take care of it.

Cassie Dalton has no recollection of her accident, but she’s told she’s lucky to be alive. A few years are missing from her memory, and the unsettling feeling that something isn’t right—along with the creepy sensation that she’s being watched—won’t go away.

Vince shows up right when Cassie needs him most. In a world of confusion, the rugged stranger is the one thing that makes sense. But little does she know, she’s found refuge in the arms of the very man who’s been sent to kill her.
REVIEW
Taking Care of the Target is an addictive page turner.

I’m not one to fall for mafia guys, but Vince DaMarco had me the moment he showed up on the page.  From the time he was a late teen, Vince and his younger brother, Bobby, were raised by his uncle, Mafia Crime Boss Carlo Rossi.  Carlo has always wanted Vince to join the “family business”, but Vince has always insisted on running the legitimate business, the family restaurant, Rossi’s Ristorante.  However, Vince has been known to cross the business line when he has to work off whatever trouble Bobby finds himself in.

Cassie Dalton has been struggling for years.  Her mother died when she was young and her father passed away a few years ago, leaving her with a mountain of medical bills.  She finally has a chance to go to college and this takes her from her small town in Colorado to Trenton, New Jersey.  To make ends meet she gets a waitressing job at Rossi’s Ristorante.  The added bonus is being able to see Vince DaMarco on a daily basis.  She even agrees to work extra shifts with the hopes of one day getting on his radar and having him just maybe ask her out.

Cassie’s dream finally comes true, when she agrees to come in on her day off to be hostess. Vince and Cassie strike up a playful conversation which ends in a bet for the loser to buy dinner.  Unfortunately, the date never happens.  Cassie accidentally witnesses a mob hit in the alley behind the restaurant and flees.  In doing so, she gets hit by a truck.  The resulting fallout is that now Carlo wants her dead.  Vince offers to take care of her by planning on getting her away to safety and out of Carlo’s reach.  But what no one knows is that Cassie doesn’t remember the murder or the last two years of her life.

Vince sets out on a cat and mouse game to protect the one woman he wants but knows he can’t have.  While Vince attempts to get close to Cassie and keep her safe, little does he know that police and the FBI are circling.  Not only does he find himself trying to keep Cassie safe but also himself after he gets a target placed on his back.

There is so much to love about Taking Care of the Target.  As characters, both Vince and Cassie are great.  Cassie has this ability to see the good in people and she makes Vince want to be a better person.  When their backs are up against the wall, they both find the courage and determination to do the right thing, no matter what the cost is.  The shoot’em up action scenes were incredible.  The bond that formed between Vince and Cassie was one of love and friendship.  The secondary characters help to make the story complete, adding villains, compassion, friendship, and support.

I found myself on the edge of my seat through a lot of the story.  Taking Care of the Target ranks up there with Melissa Cutler’s ICE Black Ops series and Leslie McKelvey's Accidental Affair.  I loved those books and years later, they still rank as my favorite romantic suspense novels.  Cindi Madsen has written a story that is easy to visualize. 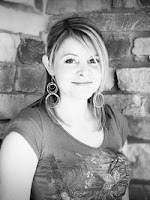 USA Today Bestselling author Cindi Madsen sits at her computer every chance she gets, plotting, revising, and falling in love with her characters. Sometimes it makes her a crazy person. Without it, she'd be even crazier. She has way too many shoes but can always find a reason to buy a new pretty pair, especially if they're sparkly, colorful, or super tall. She loves music, dancing, and wishes summer lasted all year long. She lives in Colorado (where summer is most definitely NOT all year long) with her husband and three children.

Visit her at www.cindimadsen.com, where you can sign up for her newsletter and learn about upcoming releases.

Cindi is the author of YA books All the Broken Pieces, Cipher, Rift, Resolution, and Demons of the Sun, and adult romances Falling for Her Fiancé, Act Like You Love Me, Resisting the Hero, Cinderella Screwed Me Over and Ready to Wed.