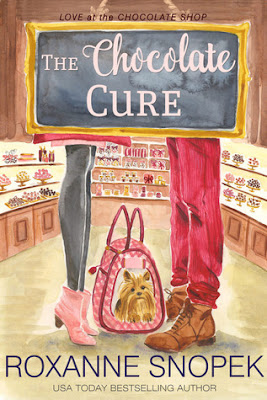 New Year’s resolutions are great. Announcing them in a crowded bar, with a chocolate martini in her hand? Not Maddie Cash’s finest moment. It’s time this new realtor got serious about her life and this time, she means it.

But when hospital volunteering lands her at the bedside of bruised and battered Mick Meyer, who has no knowledge of Maddie’s reputation – and no memory of the kiss he begged from her during that long, pain-filled night, her best-laid plans are put in jeopardy. It’s not just his sweet tooth that’s tempting her.

The hunky bush pilot with the concussion has an old family property to unload. Making this sale could be Maddie’s professional salvation. But when Mick turns on the charm, she’s in danger of forgetting all her best intentions… on chocolate… on meddling… and especially on men.
REVIEW
**Caution do not read this book without chocolate by your side.**

First of all I enjoyed The Chocolate Cure.  My problem was more with me than the book itself.  Maddie Cash was a secondary character in Cinderella's Cowboy and I spent a lot of time trying to remember her.  All I could remember was that I wasn't a fan of hers.  But The Chocolate Cure finds her attempting to be more mature and less selfish.

In the past, Maddie was more of the party girl/arm candy type but now she wants to change her ways.  She wants to be taken seriously and that means having a job, living on her own, and taking care of herself.  Maddie has even made New Year's resolutions to give up meddling, men, and chocolate.  Let's be honest here, her meddling isn't really meddling. Maddie is a realtor with a conscience and has a tendency to say if a house isn't right for a client.  As far as men….Yes she's probably gone through half the population of Marietta, Montana.  But a girl has to kiss a few hundred frogs, before she finds her prince. Chocolate….Okay, I have no idea what she was thinking.

Maddie’s good deeds lead her to volunteer at the local hospital.  On her first day, she ends up being assigned Mick Meyer, a friend of her future brother-in-law.  Mick has just had an accident involving his Cessna and is pretty beat up.  Turns out he has a concussion, among other problems.  But there's something about Maddie that eases his pain.  With no family around, Maddie feels as if she has to stick around, keep him company, and watch over him. The two become attracted to each other.  But Maddy refuses to give in to her attraction because she wants to be a new person.

A lot of the book was spent on Mick and dealing with the aftermath of his accident.  But this allows you to see what a kindhearted and caring person Maddie is.  Roxanne Snopek has written a nice, sweet (no pun intended) romance.  My biggest complaint is that there isn’t an epilogue to truly wrap up the story.

**Received a copy from Tule Publishing and voluntarily reviewed the book.**

The Love at the Chocolate Shop Series:
(Clicking on the book covers will take you to Amazon.)

Look for The Valentine Quest by Melissa McClone releasing on February 2, 2017.


March 2, 2017 will bring the release of Steena Holmes’ Charmed by Chocolate.


Each month thereafter will bring a new story to the Love at the Chocolate Shop series.