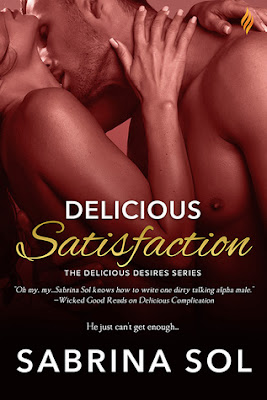 He just can’t get enough...

As LA’s hottest up-and-coming chef, Alexa Montoya is known for her ruby red lipstick, award-winning arroz con pollo and a penchant for falling for the wrong kind of men. And when a confrontation with a loser ex-boyfriend lands her in some legal trouble, she’s forced to call her long-time friend, Dante Perez, to bail her out. Only this time, Dante seems different, somehow. More gorgeous, more sexy, more…mouthwateringly irresistible. Suddenly she’s tempted to give the lawyer much more than a simple thank you…

Dante is tired of seeing Alexa with guys who only know how to steal her money and break her heart. He’s watched--and waited for--her long enough. Helping with her legal situation will finally give him a chance to win her over for good. His plan?  He’ll seduce her into finally believing that there’s something deliciously right between them…

Despite their chemistry, Alexa can’t trust that Dante won’t leave. But Dante knows how to win a case. And he’ll do whatever it takes to convince Alexa that she’ll always leave him hungry for more.
REVIEW
Sabrina Sol is back with the third and final book in her Delicious Desires series from Entangled Brazen.  A standalone read, Delicious Satisfaction features Alexa Montoya, sister of Brandon from Delicious Complication, and Dante Perez, Brandon’s best friend and attorney.

Alexa and Dante have danced around their feelings for each other for years.  As teenagers, the two had a shot at trying to be a couple, but Alexa put a stop to it.  She didn’t think she was the type of girl a guy going to an Ivy League school truly wanted to be with.  She didn’t think Dante wanted more than a summertime fling.  She couldn’t have been more wrong. Dante has a reputation for not really sticking with relationships, but he does believe in soulmates.  And if you have already had an opportunity to be with your “soul mate” and it hasn’t worked out, “It just means we weren’t ready to be them.  That’s what second chances are for, right?”  Yes, they are.

Alexa is impulsive.  She has a history of falling for guys hard and fast.  If the guy is no-good and a bad seed then chances are she’s going to fall for him.  Just when she’s vowing to be less impulsive, she loses her temper and finds herself assaulting her ex-boyfriend and destroying a part of his restaurant.  Enter Dante to save the day so she doesn’t end up in jail.  He’s ready to prove she needs a good man and he’s the man she should be with.

Before these two have the chance to think about a future together, they have to take care of Alexa’s past.  The low life, two timing, cheating, thief of an ex has filed a lawsuit against her and Brandon that could result in them losing their restaurant.  Dante is determined not to let that happen.  Alexa just needs to get out of her way and his way.

Sabrina has written a really nice second chance romance.  I’ve read four of her seven books and Dante is one of the more aggressive heroes she has written.  Alexa and Dante have some serious chemistry.  While they have known each other since they were late teens, they don’t really know everything about each other.  Thinking back on the book, what sticks out to me is the growth and transformation you see Alexa go through.  I have to admit that I’m not happy with certain parts of this story.  But the relationship between Alexa and Dante was, no pun intended, satisfying.