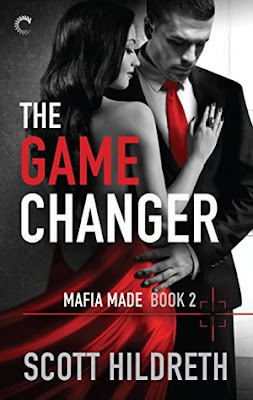 Terra
I'm going to marry this man, and nothing will stop me.

I didn't expect it to be Michael Tripp who left when we made our announcement. He knows this life, he knows what it means to be a part of mia familia.

He didn't know he was marrying the boss's daughter.

I kept it from him—I lied to him.

He came back, thank God. My love forgave me and the wedding is on.

I'll die before I allow any more secrets to come between us.

Tripp
I'm a man of my word. I love hard and tell it like it is. But the Mafia has me in their crosshairs and I'm in deep. Partnering with a crime boss is one thing. Working for a crime boss who is also your father-in-law…that's just f***ed.

I stepped up to the challenge. Shaking things up and making changes that needed to happen to secure our power. And the profits speak for themselves.

The playing field has changed. And nothing will ever be the same.

The Game Changer is the second book in Scott Hildreth’s Mafia Made series.  You definitely need to read the first book, The Gun Runner, before you read this one.  It is by far one of my favorite books/series and Scott Hildreth has become one of my favorite authors.  The writing style is so easy to follow and the characters are intriguing.  Throw in the mafia along with some mind-blowing sex scenes and what else could you possibly need.

The Game Changer continues the unlikely love story between Mafia Princess Terra Agrioli and Gun Runner Michael Tripp.  A lot of things happened in the first book including the engagement of Terra and Michael.  This second book picks up with Michael now working with mafia boss Anthony Agrioli but still not knowing that his future wife is Anthony’s daughter because that’s a secret that Terra continues to keep.  A couple of mafia related deaths and Terra’s confession about her true identity truly change the lives of Michael, Terra, and Anthony Agrioli.  Without giving too much away, let’s just say that a criminal investigation into Agrioli has some unexpected consequences including the exposure of a rat inside the Agrioli crime family.  Michael’s actions as a result of these revelations put him in an interesting position with Agrioli.  He comes from not wanting to have anything to do with the mafia to becoming one of their most trusted assets.  His instincts and dedication makes The Boss take notice and disregard the fact that Michael is not who he would have chosen as a son-in-law.  On the other hand, these events also force Terra to take a different look at the mafia family that she has long tried to deny exists.

It was great to watch how both Michael and Terra began to embrace what it means to be a part of the mafia.  Michael’s confidence and sense of loyalty is commendable.  He truly goes all in and doesn’t hesitate to do what’s necessary to protect The Family.  In addition, he is relentless in his quest for both vengeance and mafia justice.  I was amazed by some of the things that happened because of information being withheld.  I also gained a lot of respect for Terra as she began to realize that by turning a blind eye to her father’s organization while benefitting from its perks made her a hypocrite.  Terra truly grew into a woman as the book progressed.  Oddly enough, through a few tragedies and missteps, the Agrioli crime family actually grew stronger and closer.  I could go on and on about everything that I liked about this book but I’d just end up giving everything away.  In short, it’s well worth the read.  I look forward to reading the third book in this series, The Good Boss,  and I will have to read other books by Scott Hildreth to see if they can hold a candle to this series.

**Received a copy from Carina Press and reviewed the book voluntarily.**

The Mafia Made Series:
(Clicking on the book covers will take you to Amazon.)