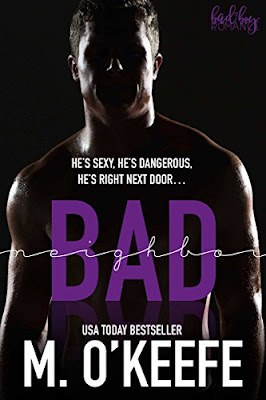 I gave up everything to save my sister from a monster, and now I’m lying low in this rundown apartment so I can stay out of danger. Hiding from everyone.
Except for the guy in apartment 1A.
He’s rude. Silent. Muscled, mysterious, and hot as hell. I don’t know if he likes me or hates me, but the more time I spend with him, the less it matters.
I want him.
And for the first time in my life I'm going to go after what I want.

She doesn’t belong in my world.

From the second 1B moves in, I know she’s keeping secrets. She doesn’t belong here, much less with a street fighter like me.
But that doesn’t stop me from craving her. Her softness and sweetness. She’s a drug, and suddenly I’m addicted.
I know someone is going to try and hurt her and I can’t let that happen. But unless I push her away and get her out of my world, that someone could be me…

REVIEW
So seriously, Bad Neighbor is not the type of book I usually read.  I was on a M. O’Keefe/Molly O’Keefe binge and I just needed more of her writing.

Jesse Herrera is not my type of hero.  I don't go for the brawler types.  You know, the kind who get beat up for money in underground fights.  But inside of this man is a person who cares about people.  When he first met Charlotte, he was a total butt.  But he ends doing something nice for her, just because she needed help and he could.  He didn’t even wait for her to ask.

Charlotte is naive and not a people person.  She’s an illustrator and is more comfortable in front of her computer drawing than interacting with the outside world.  When her twin sister gets into trouble, Charlotte is the one who bails her out, which is why she finds herself in a cheap, rundown apartment on San Francisco's South Side.

Jesse and Charlotte are brought together by fate.  They have more in common than they realize.  They’re like magnets in their attraction to each other.  It doesn’t matter how much they don’t want to be together, they can’t seem to bring themselves to leave the other alone.
I don’t want to give any part of this story away because the discovery of all the moving parts in their lives is something to behold.  Bad Neighbor has a dirty feel to it.  If I’m being honest, there was one scene that I was repulsed by.  But again, it goes back to the getting beat up part.  Their chemistry is explosive.  Jesse and Charlotte are actually good for each other.  They push the other out of their comfort zone, forcing them to live a better life.  I loved watching them each grow over the course of the book.  You get to see what brought their characters to the place in their lives where the story starts.

Bad Neighbor is an addictive read.  It has a happy for now ending, moving towards a happily ever after.  But there’s another story to be written.  The story of who brought Jesse and Charlotte to Shady Oaks in the first place.  That story promises to be just as intense, if not more.

Related Books:
(Clicking on the book covers will take you to Amazon.)