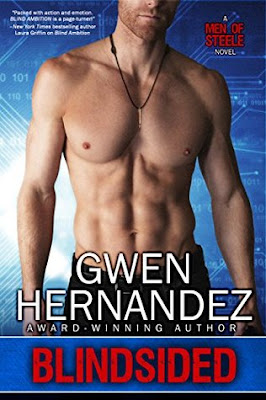 SHE’S RUNNING FOR HER LIFE
Framed for espionage, reformed hacker Valerie Sanchez has no choice but to run. Worse, when the proof of her innocence is destroyed, things turn deadly. Can she trust the sexy terrorist hunter who mysteriously turns up to protect her, or is he the real threat?

HE’S HOT ON HER TRAIL
Former Marine sniper Scott Kramer’s job was supposed to be easy. Follow the hot computer geek who stole plans for classified weapons until she meets her buyer, then let law enforcement take over. But when Valerie becomes an assassin's target, Scott's gut says she’s innocent. Now, he must risk his life—and his heart—to keep her safe.

REVIEW
Blindsided is the third book in the Men of Steele series by Gwen Hernandez.  I have read the first book, Blind Fury, but did not read the second book, Blind Ambition.  I don’t feel like I was missing anything from either book that was necessary in this one so I would consider it to be a standalone.  I am very much a fan of books that can pull off a good love story while doling out some serious action and this one did not disappoint.  It’s the story of White Hat Hacker Valerie Sanchez and former Marine sniper turned security consultant Scott Kramer.  At first Scott is sent to secretly keep tabs on Valerie as she is being investigated for illegally breaching network security networks for multiple companies.  He soon realizes that they both have been set-up and their lives are in danger.  Valerie and Scott end up working together to clear their names and bring the real perpetrator to justice.

As opposed to other books that I have read, the action occurs over the information superhighway as Valerie has to use all of her hacking skills to figure out who framed them and stay alive in the process.  Generally, matters of life and death are dealt with by using brute strength.  In this case, the guy with all of the sniper training who is adept at killing is pretty much left on the sidelines while the supposed damsel in distress ends up doing most of the heavy lifting.  This was a welcomed twist and allowed the reader to see how emasculating it can be for someone who is generally in control.  Scott takes several blows to his ego while trying to do what he can to assist Valerie and keep her safe at the same time. On the other hand, Valerie had to allow herself to open up and let Scott use his instincts to guide them while they were on the run.  At times, it was painful to watch as they worked their way through a sudden partnership on to a romantic relationship.  Scott and Valerie were good for each other and definitely had some chemistry between the sheets.  More importantly, their time spent on the run had several close calls and was not predictable at all.

Gwen went to great lengths to make Blindsided emotional.  Scott and Valerie both had some painful experiences in their pasts that they had to stare down in order to make a better future with each other.  Nothing about the outcome came easy and there was some serious casualties along the way.  It was no doubt that fate somehow brought the two of them together.

The Men of Steele Series:
(Clicking on the book covers will take you to Amazon for purchase.)

Gwen writes romantic suspense and books on Scrivener and other tools for writers. Formerly a manufacturing engineer, programmer, and business school instructor, she lives in an empty nest in northern California with her retired Air Force hero and a lazy golden retriever.