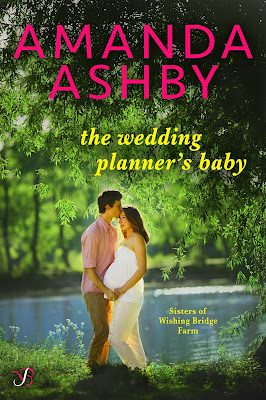 Free-spirited Bec Watson was never having children––until she is. No way she’s ready for this, and she’s not going to tie-down the father, not even (especially!) if he’s secretly an English Lord. She’s doing this solo, which means she needs help from the one place she swore she’d never return…Wishing Bridge Farm. Home.

Lincoln Mathews has never known love, only responsibility. And now his family home and business is at jeopardy unless he finds a solution. Fast. Their idea? Marry for money. But the girl who stole his heart is carrying their child. His first mission? Follow her to Wishing Bridge Farm. But soon he’ll have to choose between duty to his relatives and love for the real family he never thought he could have.

Hi Amanda.  Welcome to Read Your Writes Book Reviews.  When did you first start writing and when did you finish your first book?
I started writing when I was twenty-seven after suddenly waking up one day and deciding that I should write a book. I wish I could say I was exaggerating and that I’d some inkling when I was younger, but nope. Not a clue. I was really good at creative writing at school and had been a lifelong reader, but until that moment of clarity, the chances of me being a writer were as likely as me becoming an astronaut (which, no offence to astronauts, but it looks like a lot of work). But I digress. So, after waking up with the idea to write a book I promptly sat down and wrote a 50,000 word romance, enticingly titled Love Story. Yeah. It was as bad as it sounds! It took me about a month to write and if memory serves, I did the whole thing in bold. Because I really was that clueless!!! After that I kept writing more books and learning my craft until I finally sold my debut book ten years later. Probably another reason why I could never be an astronaut. I’m a very slow learner!

What are you favorite types of stories to read?
I read a lot of Young Adult and Fantasy books and often describe my reading tastes as that of a twelve-year-old boy because I like a lot of action, sword fighting and magic. But I also love humor and romance so when I get a book that combines all of these things, I’m pretty happy!

What are some books that you enjoyed recently?
History is All You Left Me by Adam Silveria (loved this book so much and when I finished I did that sad blinky thing when you realize that you’re not in book world at all, but rather in your house).
The Starbound Trilogy by Aimee Kaufman and Megan Spooner
Storm Front by Jim Butcher.

Name three things on your desk right now.
Colored Post It notes and colored pens
A large quartz crystal
A coaster in the shape of a Maori Tiki
(and one thing that isn’t on my desk is me! I tend to travel around the house following the sun like a cat, leaving the desk untouched by human hands!)

What did you enjoy most about writing The Wedding Planner’s Baby?
Bec’s quite wild and carefree and Lincoln is an English Lord and despite the differences they bounced really well off each other, which meant it was fun to write them. Plus, I loved Bec’s relationship with her best friend, Coop, so it was always a giggle when they were on the page together!

What types of scenes are your most favorite to write?
The silly kind. I do have a tendency to go over the top with the situations that I throw my characters into and I figure that when it gets too ridiculous then my editor will haul me back. Though, every now and then they forget, and I end up with crazy weird things happening in my books. I really shouldn’t be left unattended!

What 5 things should readers know about you?
1) I can’t tell my left from my right without shaking my hand and then working out if that’s the one I hold a pen in (and yes, I know about all the tricks of making the letter L with your left hand and no one wishes that way would work more than me. Alas, it does not). However, despite not being able to tell my left from my right, I have a really great sense of direction, which was very handy in the pre Google Map/SatNav days!

2) I was born in Australia but have lived for many years in both England and New Zealand and as a result have a very strange accent. No, seriously, if we were having a strange accent competition I would totally win!

3) I will forever love The Spice Girls and all forms of 90s pop music. This makes my husband shudder, to which I merely reply zig-ah-zig-ah.

4) When it comes to black boots, I’m a firm believer that more is better!

5) The above policy also applies to purses and white linen blouses.

What do you do when you are not writing?
I also work in the children’s department at my local library, which is awesome! I love books and I love seeing kids reading books so it’s a win/win. I also spend lots of time watching television or having my own nose buried in a book. Oh and I have a small and totally under control addiction to buying vintage treasures, which keeps me busy!!! Apparently I also have a family to feed and water, so let’s pretend that they come further up the list!

Lastly, do you have any advice to give to aspiring writers?
I sure do! For a start, I’m so proud of everyone who listens to their inner voice, who dares to follow their dreams and who steps into the magical space of creativity, it’s an amazing place to be! As for advice, there is quite literally only one way to write a book, and that’s word by word. Yes, you might not have the craft nailed, or understand how a scene works but until you sit down and start writing your story, you’ll never figure it out. So, take a deep breath and get started. You got this!

Amanda, thank you so much for answering some questions for me.

A warm sensation spread in her belly as the afternoon air filled with his aftershave. She licked her lips while somewhere at the back of her mind warning bells were ringing, telling her it was a bad idea. That the baby came first. But then she remembered their conversation at Daisy Hill. He said he’d give her what she needed.

And right now, I need this.

“Oh.” The breath caught in her throat, and it took all her willpower not to just lean in and kiss him. “I’m not sure what to say.”

“Don’t say anything.” He shook his head as his fingers reached out and found hers. “It seems like when we speak, everything comes out wrong.”

“Lost in translation,” she croaked, as her insides turned to fire.

His fingers clamped down on hers. Emmy had said kissing him before talking was a bad idea. But they’d talked. She’d taken him to the doctor’s. And he said I have a unique way of looking at the world.

“Exactly.” His other hand reached up and cupped her chin, turning her skin to liquid. “And I’m sick of things being wrong.”

“Me, too.” Bec inched forward and was rewarded by the sensation of his mouth crashing into hers. The scenic cliff melted away, his cell phone fell to the ground, and all that was left was him. The kiss intensified, and his fingers tightened around hers, but it wasn’t enough. I don’t want any space between us. She dragged her hands free and curled them around the back of his head, her skin burning.

He let out a groan and pulled her on top of him. Explosions, fireworks...the whole lot swirled in her belly as he planted hot kisses down her neck. She tugged at his shirt buttons, not caring that they popped off. All she cared about was the shirt was now gone.

Ah, that’s better. She ran her greedy hands across his chest, his muscles rippling beneath her touch. His hands slid up under her T-shirt. Goose bumps skittered along her body as his fingers cupped her breasts. Whoever invented this deserves a medal.

She tugged at her own shirt, desperate to get rid of it. His eyes gleamed, and his mouth immediately went in search of the small owl tattoo that rode on her shoulder. The first time he’d run his fingers across it, he’d told her how much it turned him on. And now, feeling his breath hot against her flesh, she though how the small pain from getting the ink had all been worth it.

The Sisters of Wishing Bridge Farm Series:
(Clicking on the book covers will take you to Amazon.) 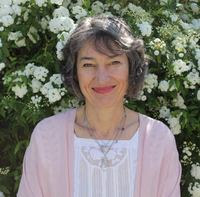 Amanda Ashby was born in Australia but now lives in New Zealand where she writes romance, young adult and middle grade books. She also works in a library, owns far too many vintage tablecloths and likes to delight her family by constantly rearranging the furniture.


She has a degree in English and Journalism from the University of Queensland and is married with two children. Her debut book was nominated for a Romantic Times Reviewers Choice award, and her first young adult book was listed in the New York Public Library Stuff for the Teen Age.  Because she’s mysterious she also writes middle grade books under the name, Catherine Holt and hopes that all this writing won’t interfere with her Netflix schedule.


You can follow The Wedding Planner’s Baby Blog Tour here.

a Rafflecopter giveaway
Follow
Posted by Kim at 2:40 AM