Review ~ I SEE YOU by Clare Mackintosh 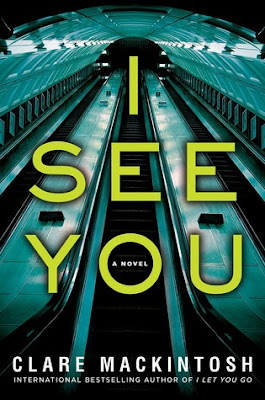 The author of the smash bestseller, I Let You Go, propels readers into a dark and claustrophobic thriller, in which a normal, everyday woman becomes trapped in the confines of her normal, everyday world...
Every morning and evening, Zoe Walker takes the same route to the train station, waits at a certain place on the platform, finds her favorite spot in the car, never suspecting that someone is watching her...
It all starts with a classified ad. During her commute home one night, while glancing through her local paper, Zoe sees her own face staring back at her, a grainy photo along with a phone number and listing for a website called findtheone.com.
Other women begin appearing in the same ad, a different one every day, and Zoe realizes they’ve become the victims of increasingly violent crimes—including rape and murder. With the help of a determined cop, she uncovers the ad’s twisted purpose...a discovery that turns her paranoia into full-blown panic. For now Zoe is sure that someone close to her has set her up as the next target.
And now that man on the train—the one smiling at Zoe from across the car—could be more than just a friendly stranger. He could be someone who has deliberately chosen her and is ready to make his next move…

I See You is the first book that I have read by Clare Mackintosh.  Although it started out a little slow, I will say that it picked up the pace halfway in.  After that, all bets were off.  Part of my issue may been that it was based in London and it took me a while to relate to some of the descriptions and colloquialisms that were used.  As a mystery suspense, this was definitely one of the more intriguing books that I have read in awhile.  It is almost impossible to have predicted how this thing ends.


I See You is the story of bookkeeper Zoe Walker and what happens after she notices what she believes to be a picture of her in the back pages of the London Gazette.  That picture is accompanied by a reference to a website called FindTheOne.com.  However, it’s not what you think it is.  Instead of a dating website, it’s something far more sinister.  After the police are made aware of other photos linked to actual crimes against women, things really start to take a turn.  Zoe begins to get more and more paranoid as more information develops.  On the other side of all of this, we also get to see the investigation from the perspective of Transit Cop Kelly Swift who is trying to redeem herself.  Kelly has a lot of baggage related to her twin sister and also regarding an incident that happened with a suspect years ago.  As Zoe and Kelly exchange information, hints at who the true criminal is begin to surface and I never saw it coming.


There is so much more that I would like to say about this thriller but I would be giving away all of the good parts.  Trust me, it’s well worth the read.  You will be on the edge of your seat and likely watching your back the next time, you step out in public.
**Received a copy from the Penguin and reviewed the book voluntarily.**

Clare Mackintosh, the international bestselling author of I Let You Go, spent twelve years on the police force in England and has written for The Guardian, Good Housekeeping, and other publications. A columnist for Cotswold Life and Writing Magazine, she is the founder of Chipping Norton Literary Festival.