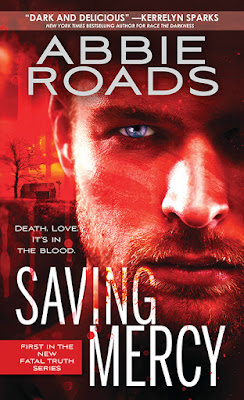 He's found her at last
Cain Killion knows himself to be a damaged man, his only saving grace the extrasensory connection to blood that he uses to catch murderers. His latest case takes a macabre turn when he discovers a familiar and haunting symbol linking the crime to his own horrific past-and only one woman could know what it means.

Only to lose her to a nightmare
Mercy Ledger is brave, resilient, beautiful-and in terrible danger. The moment he sees Mercy, Cain knows he's the one who can save her. He also knows he's beyond redemption. But the lines between good and evil blur and the only thing clear to Cain and Mercy is that they belong together. Love is the antidote for blood-but is their bond strong enough to overcome the evil that stalks them?

Saving Mercy was by far the most gruesome romantic suspense book that I have ever read. To say that there was a lot of blood would be an understatement.  There was blood everywhere.  Blood was literally the main theme of the book.  Blood relations, painting in blood, and to make things even more disturbing, the hero Cain Killion is able to get into the mind of any killer by covering his body in victims’ blood.  It was beyond disgusting and just plain old nasty.

Cain Killion is an FBI consultant who uses his unique ability for good in order to make up for the heinous crimes committed by his biological father Adam Killion, who is in prison for killing the Ledger Family 20 years ago when Cain was only ten.  The twist in all of this is that Adam left the youngest of the Ledger family alive although he did attempt to slash her throat.  Her name is Mercy and for the past two years, she has been wrongfully imprisoned in a mental institution.  When symbols from a current murder scene point Cain in Mercy’s direction for answers, he ends up breaking her out of the institution and discovering that he and Mercy have an attraction to each other that can’t be denied.  In addition, Mercy has been mentally and physically abused by her doctor all of this time.  In fact, the doctor is so obsessed with her that he goes looking for her and Cain.  But that’s not all of it.  As the FBI’s investigation into a possible disciple of Adam Killion continues, Cain puts the pieces together and what he finds out will shake him to the core and bring him to the breaking point.

The psychological implications of Saving Mercy are disturbing.  The level of violence and bloodletting will make your skin crawl.  I don’t even see how it was possible to weave a romance into all of this brutality.  It was very difficult to enjoy the parts of the book that were clearly intended to be hot and steamy when all I could think about was when was the next blood scene going to occur.  Honestly, I don’t know if I could stomach another book like this one.

**Received a copy of the book for Sourcebooks Casablanca and voluntarily reviewed.**