Feature Spotlight & Giveaway ~ AT HOME WITH ANDRE by Kathleen Duhamel 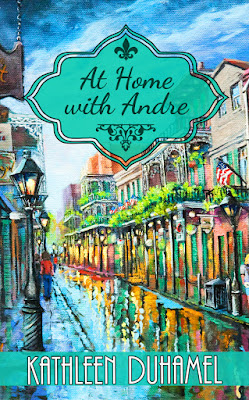 New York public relations consultant and self-proclaimed control freak Katie McDowell may have made the biggest career mistake of her life. She’s agreed to temporarily leave her beloved Manhattan to manage the company’s struggling New Orleans office, knowing her biggest client is television chef Andre Thibodeaux, whose massive masculine presence makes her feel hotter than the onset of menopause.

Finding her way in a funky new city and earning the trust of her employees is tough enough without annoying hot flashes, night sweats and ugly mood swings, not to mention the lingering memory of one steamy night she shared with the big man she thinks she can’t have.

Sexy, smart, and successful, Chef Andre has everything a man could want except the right woman, and he’s determined to learn why Katie rejected him. To convince her to stay in Louisiana, he’ll need to find a way to make her fall in love-with him, as well as the vibrant southern city he calls home.

“I can’t remember the last time I ate fried food,” I confess. “This could make me fat.”

He looks me over and offers another perfect smile.

“You’ve got a ways to go, dawlin’. Besides, I like a woman with a little meat on the bone.”

His comment leaves me speechless. I hope he’s not insinuating that I’m his woman after what happened in Vegas.

My deprived taste buds can’t get enough of his comforting food. After I polish off two pieces of chicken, the rest of the okra, and a generous portion of mac and cheese, I’m stuffed, but my dinner guest has more to offer. He gets up from the table and returns with a peach cobbler and two spoons.

“Ya gotta try this,” he insists. “It’s another old family recipe.”

I don’t usually eat pie, either, but this one is divine—a flaky, buttery crust covering tender, juicy fruit with a hint of cinnamon. I take a couple of bites, absently wondering how many thousands of calories I’ve consumed today.

Andre clears our plates and refills my iced tea glass before pulling a cell phone from his pocket.

“Someone told me you’re probably homesick for New York, so I thought this might cheer ya up.”

Someone? Denise, no doubt. He hands me his phone, and I press an arrow to view a video of a rat dragging a large slice of pepperoni pizza down the concrete steps of a New York subway station. Twice, he scurries off when humans descend the steps, only to return and grab his prize. I can’t help but admire the resourcefulness of another industrious New Yorker, scrambling to survive in the heart of the city. I’m not quite sure why the sight of a hungry rodent makes me so emotional, but it’s all I can do to stop myself from bursting into tears.

Purchase At Home with Andre from:
Amazon

The Deep Blue Series:
(Clicking on the book covers will take you to Amazon.) 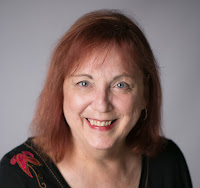 Kathleen Duhamel is the author of Deep Blue, Deeper, and At Home With Andre. She wrote and illustrated her first short story at the age of eight, and has been a writer for most of her life. Her love of the written word continued throughout her varied career as a newspaper journalist and editor, public relations executive, freelance travel writer and owner/operator of two small businesses. A native of Texas, she spent most of her adult life in Colorado before relocating to Virginia in 2014, where she lives with her husband, a standard poodle and geriatric cat. She is a lifelong devotee of rock and soul music, contemporary art and pop culture.


You can follow the At Home with Andre Blog Tour here.

a Rafflecopter giveaway
Follow
Posted by Kim at 12:30 AM