Review ~ THE HANGMAN by Mary Burton 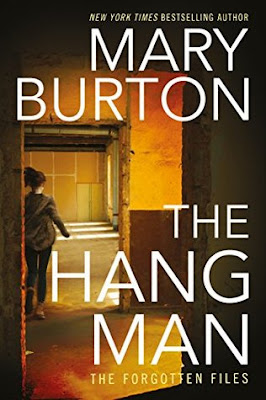 Julia Vargas is a cop with a mission. When she’s not chasing down bad guys, Julia dedicates her time to investigating the Hangman serial killer…the same unsolved case that her father, Jim Vargas, was working on when he supposedly shot and killed himself three decades before. While rumors continue to swirl around her father’s death, Julia attempts to hunt down the truth.

The case once again hits dangerously close, however, when a woman’s bones are discovered in a historic downtown home, together with a photograph of Jim and Julia as a young girl. As horrifying as this discovery is, it may just be the break Julia has waited for. Working alongside Tobias Novak, a homicide detective with whom she shares a complicated—and steamy—history, she’s forced to confront her own past even as the Hangman looms in the shadows. But as the mysterious killer circles closer, Julia can feel her own noose begin to tighten…

The Hangman is the third book in Mary Burton’s The Forgotten Files and just like the other two, this one does not disappoint.  The suspense is intense and all of tension that builds could be cut with a knife.  The death toll spans back 25 years and involves an unlikely cast of characters that include a police officer who took his own life, a ruthless drug lord or two, and some not so innocent women.

The discovery of a woman’s decaying body in a burning house uncovers several interesting truths.  One of those truths indicate that she may have been the last victim of a serial killer. The other truth shows that this woman had some sort of relationship with a cop who also died around the same time.  Oddly enough, that cop’s daughter, Julia Vargas is now part of the Virginia State Police and is about to re-open the last case that her father Jim was working on before he died.  The case is about a killer that was dubbed The Hangman.  Some people even think that Jim Vargas may have been The Hangman.  Julia is a great cop but she is emotionally unavailable due to a rough childhood and some baggage from her last undercover gig.  She ends up getting some help with her investigation from a Richmond Detective named Tobias Novak.  The two have been having a mostly sexual relationship so things get complicated as they work together on this case.  Novak wants to help calm Vargas’ demons but she feels too damaged to open up.  Their relationship creates an interesting distraction to the case.

There is so much to be said about how this all plays out but I can’t.  Let’s just say that The Hangman was great.  It was intriguing, emotional and surprising.  I couldn’t stop trying to connect the dots as the mystery began to unravel.  I had no idea who The Hangman was until he was revealed.  The list of suspects was long and no one was above reproach.  Mary Burton kept me guessing and I pointed the finger to the wrong person every time.  That’s what I love about this series.  Nothing is what it seems.  In addition, I couldn’t help but hope that Novak and Vargas became a real couple as they were very good for each other. Plus, several people from the previous books make an appearance since this all happens to involve the same police departments.  I look forward to the next discovery.

The Shirk ~ Review
The Dollmarker ~ Review