Review ~ ABOUT A DOG by Jenn McKinlay 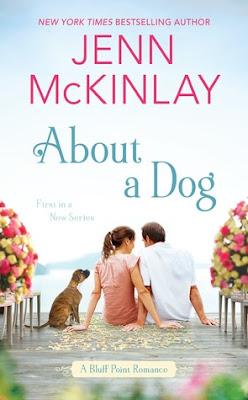 Fall in love with a little help from man's best friend in New York Times bestselling author Jenn McKinlay's contemporary romance debut.
Mackenzie "Mac" Harris fled her hometown of Bluff Point, Maine, after being left at the altar--and seeking solace in the arms of her best friend's off-limits brother. Now, seven years later, she's back to attend her best friend's wedding--safe, or so she thinks, from the mistakes of her youth.But Gavin Tolliver has never forgotten the woman who has always held his heart. And when Mac rescues a stray puppy named Tulip, only Gavin, the town's veterinarian, can help. With a little assistance from Tulip, Gavin vows to make Mac realize that their feelings are more than just puppy love...

Jenn McKinlay makes her return to the romance world with About a Dog.  The first book in her Bluff Point series will have you laughing out loud, swooning over a Veterinarian hero, and wishing you could jump into the pages and cuddle a puppy.

Mackenzie “Mac” Harris left her hometown of Bluff Point, Maine with her proverbial tail between her legs, after being left at the altar on her wedding day.  It’s been seven years since she's been back, and the only reason she is returning is because her best friend Emma is getting married.

Gavin Tolliver has been in love with his older sister’s best friend for as long as he can remember.  While he wasn’t happy to see her so devastated on her wedding day, he can’t deny that it gave him the opportunity to finally have a chance with Mac.  Too bad she disappeared after a night of unforgettable passion.  It’s been seven years since he has spoken to Mac.  He only has two weeks to make her remember their time together and convince her to give them an actual chance.

After suffering his own heartbreak, Emma asks Mac to be Gavin’s plus one on at all the couples events, as a way to lift his spirits.  Mac begrudgingly agrees, knowing that being with Gavin will make her remember that night so long ago.  Gavin couldn’t be happier and plans on taking every opportunity to whisper sweet things into Mac’s ears.  Ultimately, the two are brought together by a stray puppy Mac finds.

I’m a fan of Jenn’s cozy mysteries and I was super excited to find out she was writing a romance.  I thought this was going to be a sweet romance, but I was pleasantly surprised to find a closed door romance.  If you’re looking for smexy times galore, this isn’t the book for you.  In fact, the actual smexy times don’t happen until about 85% into the story. Something else which surprised me was some of the language choice.  It’s like Jenn wanted to go all out, but held back a whole lot.

While About a Dog is a little predictable, it’s a whole lot of fun.  This is a story with great characters who are amazing friends.  It’s a perfect story for dog lovers and romance lovers alike.  I’m looking forward to the next book in this series.