Review ~ LEAVE IT TO CLEAVER by Victoria Hamilton 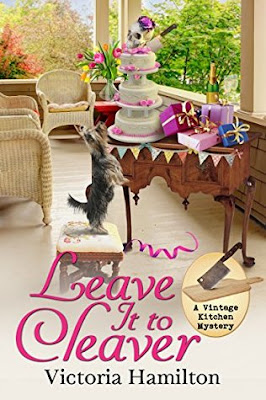 In the brand-new Vintage Kitchen Mystery from the author of White Colander Crime, someone with an old grudge decides it’s time to bury the hatchet . . .

“Smartly written and successfully plotted, the debut of this new cozy series . . . exudes authenticity.” —Library Journal on A Deadly Grind

Vintage cookware and cookbook collector Jaymie Leighton has agreed to help her sister clear out the house of a deceased older neighbor, and she’s thrilled at the prospect of discovering antique kitchenware and other treasures—until she opens a vintage trunk in the cellar and finds the remains of a teenage girl with a cleaver buried in her skull. When the body of a second girl is found just days later in a nearby river, the clues all indicate that the crimes are connected—and that the culprit’s motives are hidden in the past.

Jaymie just wants to cut and run, but the victims were both high school classmates of her sister when they disappeared, and that makes Jaymie the perfect person to help the local police investigate the killings. As she dredges up old memories and even older rivalries and jealousies, her list of suspects grows. But Jaymie knows she’ll have to whittle it down to just one, and fast, because someone has decided to cut their ties to Jaymie—in the most fatal of ways . . .

The story, which is told in third person, finds Jaymie Leighton’s relationship with single father Jakob Muller proceeding quite nicely.  The romance girl in me is very, very happy. Jaymie’s life is finally settling down, though she is very busy with her newspaper column, volunteer work, and various business endeavours.  But things are about to get even busier on both the personal and murder investigation fronts.

While helping her older sister, Becca, clean out the old Paget house for liquidation, they come across the body of Delores Paget stuffed in a trunk in the basement.  Delores was a one time friend of Becca’s who suspectedly left town at the age of 16 in 1984.  The whole town of Queensville, Michigan is wondering what happened to Delores and why.  But things get even more interesting when the body of a second missing teen thought to have also ran away is found.  Police are at a loss as to how to proceed with two decades old murder investigations. The girls don’t seem to have anything in common except having dated the same guy.  Both are from different social and economic circles.  The girls seem to have disappeared around the same time, but no one is really for sure.  Even more interesting, the girls are found wearing the same handmade sweater.

Jaymie gets a request from Chief Ledbetter to help him investigate since she’s friends with so many people who knew the teens.  She reluctantly agrees and in the course of investigating, makes some new discoveries about her sister as well as her friends.  The story goes back and forth between 1984 and the present.  While in the past, you are able to read about various characters and get a feel for their state of mind all those years ago.  But of course, the killer is closer than Jaymie or anyone knows.  Jaymie’s life gets puts in jeopardy through no fault of her own and a surprise hero arrives to save the day.

Victoria Hamilton has written an incredible mystery that will have you guessing until the big reveal.  The misdirects were great.  The reason behind the murders were surprising.  In the end, I was left with a box of tissue sitting next to me and my heartbreaking.  I am so excited this series is continuing and I can’t wait for the next installment.

Email ThisBlogThis!Share to TwitterShare to FacebookShare to Pinterest
Labels: 5 Stars, Beyond the Page, Cozy Mystery, Reviewed by Kim, Victoria Hamilton