Review ~ TALK BRITISH TO ME by Robin Bielman 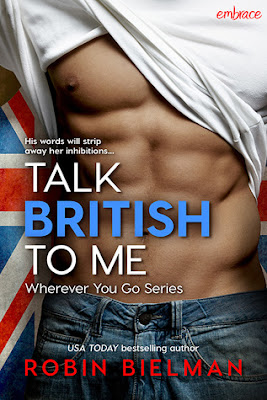 His words will strip away her inhibitions...

As the Dating Guy on L.A.‘s top morning show, I give the single guy’s perspective on dating, love, and sex—and I give great advice. Everyone’s hooking up…well, except for me. Sure, I can get any woman I want, but I’ve got a “no relationship” clause in my contract and the only woman I want has “relationship” written all over her. Probably stamped on her ass, too. And wouldn’t I like to confirm that.

Unfortunately, she wants nothing to do with me. At all. Something about the next Ice Age might have even come up in her rebuttal. Adorable. Because she’s determined to ignore what one simple kiss proved: she wants me as badly as I want her.

Everything in me is screaming to go after her, but I’ve got a secret that I’m fairly certain will end up with her roasting my nuts over an open fire. So, job on the line? Check. Nuts on the line? Check. Can’t get her out of my head? Nail…meet coffin. But what a way to go…

It needs to be said that Robin Bielman can write anything she sets her mind to.  Talk British to Me is her first foray into the New Adult Romance genre and is the first book in her Wherever You Go series from Entangled Embrace.  It’s classic Robin with a cocky, dirty talker thrown in.  Yes, take a moment to sigh.

Talk British to Me features Teague Watters, who many readers met when her siblings all found love in Robin’s Secret Wishes series from Entangled Bliss.  Teague has graduated from college and is ready to forge her own path, be her own person, and make her own mistakes. Along with her best friend Harper, whom she met in college, moves to Beverly Hills, California ready to live the dream.  Teague works as a barista for a coffee house, while taking online courses to be a travel writer.  She makes daily trips to an office building to deliver coffee to Gabrielle Gallagher, a highly sought after wedding consultant.  When Gabrielle needs a new assistant, she bulldozes Teague into talking the job.  While the money may be good, Gabrielle is definitely the boss from Hades.  She’s rude, dismissive, and downright mean.  But she’s one of the best at doing what she does.

Mateo is the voice behind Bennett, the cocky British guy who gives out love advice to millions of LA radio listeners on a weekly basis as The Dating Guy.  He loves his job that involves him having to consistently go out and date women.  He’s good at reading people and can have any woman he wants.  He’s not looking for forever and is upfront with that.  If you’re looking for one night, maybe two, he’s your man.  But things are about to get a little interesting for Mateo. His world will never be the same.

While at a bar celebrating with one of his best friends and roommate, Mateo literally bumps into Teague, who has forever written all over her, and walks away with a shirt covered in hot wings sauce.  In that one encounter, Mateo knows he has to know more about her.  As fate would have it, they keep running into each other.  But things definitely hit a rocky patch when they realize that Teague works for his mother.  Oops.  But have no fear, Mateo is not about to let that stop him for being with Teague.  “Baby, there is nothing I’m not good at.” Hmmm. I don’t think there is.  There are definitely sparks between these two and while Mateo knows that Teague needs to be with a guy who can promise her forever, he can’t seem to let her go.  “When you’re ready to touch my lips, Knox, let me know, and I promise I’ll touch yours back.”  Oh sigh.  He did and then some.

Talk British to Me was a good read.  This story had a few surprises to it.  I loved the friendship that blossomed between Teague and Mateo as well as the secondary characters. Let’s just say, there are a couple who seem to have some unfinished business between them. Robin Bielman has this amazing ability to write characters that you just want to know and have be apart of your life, too bad they aren’t real.  Not only does Robin write the most amazingly sweet heroes, but Mateo is a dirty talker!!!!  Be still my heart.  The only draw back is that he’s just a little too cocky for my tastes, but he does mellow out in the end.

I mentioned some characters having some unfinished business, I seriously can’t wait for the next book.

**Received a copy from Entangled Publishing and reviewed voluntarily.  I also personally purchased a copy of the book.**

You can read an excerpt of Talk British to Me here.