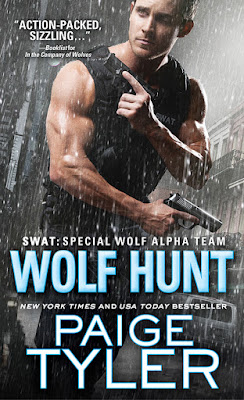 A STORM IS BREWING…

Remy Boudreaux has kept his distance from women ever since his partner and girlfriend was killed on the job. From his point of view, you can’t be hurt if you never let anyone get close.

Everything changes when Remy reconnects with the beautiful forensic scientist—and his high school crush—Triana Bellamy. Remy is determined keep things casual. But when a mysterious wolf pendant ropes them both into danger, Remy may have to reveal his true self...and hope Triana accepts him just as he is.

Wolf Hunt is the 6th book in Paige Tyler’s SWAT: Special Wolf Alpha Team series.  It’s a standalone but you would enjoy it more by reading the other books first.  There is a lot of information regarding these werewolves and their pack that becomes more enriched with every installment.  I have read them all and they continue to get better and better which I find to be very impressive, all things considered.

Wolf Hunt is about resident bachelor and New Orleans native, Remy Boudreaux.  Remy and a few of his other Dallas SWAT team members are in New Orleans to do some cross training with the NOPD.  He stumbles into his high school friend Triana Bellamy who is in town visiting family and friends.  As with the other books in the series, we soon find out that Remy and Triana are destined to be together although they don’t know it yet.  To further complicate things, Remy and his packmates end up assisting the NOPD with their attempts to take down a known meth drug kingpin.  But it doesn’t stop there, Triana has a private detective looking into who brutally murdered her father two years ago.  Information comes in from all directions that put Remy and Triana in a tailspin that has a huge impact on their relationship and their lives.

I love how Paige continues to expand the Werewolf lore and creates a different way to look at their existence.  The introduction of Triana’s mom, Gemma was a good way to show that the werewolf secrets aren’t held by the werewolves alone.  Gemma was a great source of information and I really loved her spirit.  Triana had a lot of her mother’s traits and proved to be a very strong black woman too.  Of course, it’s always fun to see how the SWAT pack members harass each other like frat boys but will do whatever it takes to keep each other safe.  The pack is very big on family and I can appreciate that.  They may not always get along but they will defend each other to the end.

Wolf Hunt was packed with plenty of sexual energy as well as some fierce fight scenes.  I was drawn in from the very beginning and it was hard to put the book down.  Even though some things were predictable, there were still some pleasant surprises.  I look forward to see what happens when the next pack member finds “The One.”

Check out Paige’s Guest Post on creating the series and enter to win a copy of book five, Wolf Unleashed here.