Interview, Excerpt & Giveaway ~ A TASTE OF YOU by Teri Anne Stanley 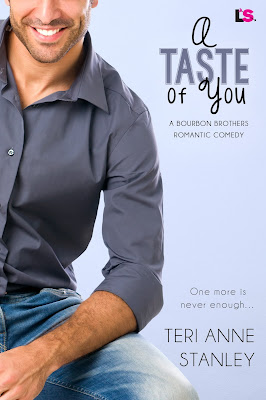 One more is never enough...

Office supply addict Eve McGrath’s meticulously organized life is on the verge of crashing at her feet. Blue Mountain distillery’s new tasting and visitor center has to be finished pronto or her mother will lose her mind. Good thing Eve likes a challenge—which is exactly what she’ll face trying to convince the flaky contractor’s hot son to finish the job.

Nick Baker is back in Kentucky just long enough to get his wayward dad back on his feet. Then he’s gone. Unfortunately, he can’t resist helping Eve, the sexy distiller-in-distress, whose addictive, bourbon-flavored kisses threaten his carefully constructed boundaries. And if he can’t rein himself in, the uncomfortable secrets of past will nail him to the wall…

Hi Teri Anne.  Welcome to Read Your Writes Book Reviews.  How are you?
I’m awesome! It’s summer, which means my day job is crazy because our lab is full of summer interns, I’ve got two books due, um, last week, and the book of my heart, A Taste of You, releasing right now. Which means it’s a PERFECT time to take two weeks off to cruise across the country in a camper, which is what I’ll be doing when this interview is posted!
I’ll sleep when I’m dead.

Oh my gosh!  You have a lot going on.  I hope you enjoy your cross-country journey.  A Taste of You is the third book in your Bourbon Brothers series.  Can you please tell me about the series?
The Bourbon Brothers books are centered around an imaginary distillery in the Kentucky Bluegrass Region. Blue Mountain Distilling is owned by two families, the Morgans and McGraths, who happen to have four very romance-appropriately aged children between them. Guess what happens?

You just put a big smile on my face!  This is definitely sounds like a fun series. A la Twitter style, please describe A Taste of You in 140 characters or less.
Ummm…

Yeah. That was my reaction when I asked the question.  I’m sorry.
A Taste of You is what happens when a one-day-at-a-time alcoholic carpenter goes to work with a highly planner-oriented distillery heiress.

Perfect.  It fits!  Tell me about Eve McGrath and Nick Baker.
Eve is the oldest, most organized daughter of the McGrath half of Blue Mountain, and she’s determined to keep her family on track—even at the expense of her own sense of self. She grew up in a confused world—she was weaned on whiskey (well, practically), but her late father was alcoholic and her mother is an example of codependency run amok. Enter Nick Baker—also from an alcoholic family, and a recovering drunk himself. He’s not planning to fall off the wagon, but when he meets Eve, and starts to care for her, has to face his own fears about trusting that good things can happen.

Wow, that sounds really deep, doesn’t it? All that heavy stuff is wrapped in a really fun story!

It sounds like a really good story, one where I really want to see what happens.  What types of scenes are your most favorite to write and why?
I guess my favorite scenes are when the hero and heroine are connecting on the friend level. The sexy parts and the emotional times are just as important, but it’s the friendship thing that makes me believe that a couple really works, and where I feel the chemistry start to come together in a story.

I think you definitely need friendship where love is concerned.  I have a feeling some funny things go down between Eve and Nick.  Tell me about one of your favorite scenes from the book.
Oh. The Magic Closet is my favorite. We have one of those at work—a small office where the department keeps a stash of office supplies. I could go in there and get lost for hours. I’ve never had the kind of fun that Nick and Eve have in there (fortunately for our department administrator, lol), but I had fun imagining what might happen when an adventurous hero starts to understand what makes the heroine tick—and folders and post-it’s really do it for Eve.

Lol.  Eve sounds like my kind of girl.  When you aren’t writing or working what will we find you doing?
I love to do crafty stuff—I sew, I knit, I spin yarn, I crochet, doodle, paint, bead…you name it—if I can get it at Hobby Lobby or Michaels, then I want it. I’ve also gotten into genealogy lately—I even joined the Daughters of the American Revolution! And I have dogs—Stella is a 12 year old lab, and Homer is an almost 2 year old Lab/Dane mix. And then there’s Penny, my grand-dog, who is a very neurotic—and very sweet—Coonhound. Mr. Stanley and I like to spend time staring at the Ohio River whenever possible. I rarely cook or clean.

I love dogs!  Thanks for taking time to talk with me.
Thanks for having me and for letting me yammer on about my books and life and office supplies!

No problem.  You’re welcome back anytime!

They were alone. Eve was suddenly nervous. What was the deal? She wanted to ask Nick if the incident in the truck last weekend was a one-shot deal, if he’d decided he really wasn’t that into her, or if there was going to be more, but reminded herself that she was taking things as they came.

Not stressing over the future. The bag with her planner inside banged against her hip as she led Nick down the hall to a door at the end. “Well, this is it,” she told him.

“No. The Office Superstore out on 62 is my mecca. This is just a temple.”

“Oh yeah,” she told him. “Those times I get to take the company credit card and go to the office store? All that potential for organization and efficiency? It’s like Christmas and New Year’s Eve all rolled into one.”

“Copy paper.” He said it in a deep, growly voice that could have come from a 1970’s R&B singer. “Thumb tacks.” He waggled his eyebrows at her, and she giggled.

She turned away to grab the door handle, and he stepped closer, so she could feel him almost but not quite touching her from shoulder to butt. No, it wasn’t the thought of file folders that had her nipples tightening and heat pooling low in her belly. She stepped back, bumping into him as she pulled the door open, revealing her stash of office supplies.

“Paper clips.” This was more of a husky whisper. Which did actually send a shiver down her spine, but not because of the words themselves, more about the way he said it. Right into the place where her shoulder met her neck. His hands were on her hips now, and with just a tiny bit of effort, he could have her fully back against him. “Ball point pens.”
Her entire body flushed, and she took a chance asking the question, because leaving this up to fate was no longer an option. “Are you trying to seduce me with sexy language?”

“I think it is,” she told him and turned to face him.


Purchase A Taste of You from:
Amazon | Paperback | Barnes & Noble | iTunes | Kobo | Goodreads

Teri Anne Stanley has been writing since she could hold a crayon--though learning to read was a huge turning point in her growth as a writer. Teri's first stories involved her favorite Saturday morning cartoon characters, followed by her favorite teen idols.  She has also authored a recipe column (The Three Ingredient Gourmet), and scientific articles (Guess which was more interesting!).  Now she writes fun, sexy romance populated by strong, smart women and hunky heroes.

Teri currently supplements her writing income as a neuroscience research assistant.  In her nearly non-existent spare time, she is the human half of a therapy dog team, an amateur genealogist, and a compulsive crafter (if there are directions on the internet, she can probably make it). Along with a variety of offspring and dogs, she and Mr. Stanley enjoy boating and relaxing at their weekend estate, located in the thriving metropolis of Sugartit, between Beaverlick and Rabbit Hash, Kentucky.


Follow the A Taste of You Blog Tour here.