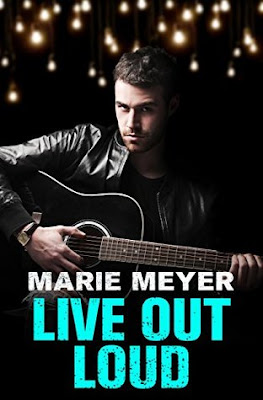 I'll never be able to hear, but music has always been a source of comfort for me. Rather than listen to the rhythm, I can actually feel the beat pulsing through me. It's pure bliss. So the moment I saw Thorin playing his guitar, I was mesmerized. I'd never seen anything more beautiful . . . or intimate. I couldn't tell where his body ended and the song began. He's everything I need in my life . . . I'm falling fast, hard, and deep.

I want him more than anything. But while I live in silence, Thor lives in secrets. He's holding something back-something that's keeping this intensity, this longing from being real. And the silence may be too loud to bear . . .

There was a time when the words “New Adult/Coming of Age” made me cringe.  I’m talking I just refused to read the books.  Marie Meyer has changed that for me.  Live Out Loud is the second book that I’ve read from her and I’m hooked.

Live Out Loud is the story of Harper King and Thorin “Thor” Kline.  Harper is a twenty-six-year-old pharmacy student.  Thor is a twenty-four-year-old auto mechanic and musician.  As if in a dream, the two make eye contact while Thor is on stage performing.  It’s like in those fleeting moments they could see into each other’s souls.  After the set is over, Thor tracks Harper down, only to discover she’s deaf.  He ends up giving her his number and then hoping that she calls him.

Thor is a man who lives in fear that he will become abusive like his father.  Thus, he doesn’t do relationships.  Harper is the first woman to make him want to reconsider his ways of the past.  “I want to get to know you.  Everything about you.”  These two go on to have an incredible relationship, though it is paved, at times with heartache.  Harper is amazed and surprised that Thor is willing to learn to communicate with her in her language, something her parents have refused to do.  However, their happiness is stalled when Thor’s drunk and abusive father returns and wreaks havoc on Thor and his mother.  Sometimes it’s the things that are unsaid that hurts the most.  Harper and Thor must find a way to trust not only themselves but each other.

I liked Live Out Loud from the beginning.  I was intrigued to see how a hearing person and a deaf person could navigate the world together.  Thor captured my heart immediately because he didn’t back down when he found out Harper was deaf.  He was sweet and caring, in wanting to get to know Harper and put her at ease.  I hated the fact that he’s a smoker. Harper was surprising in her strength.  She refused to play the shrinking violet that her family and others wanted her to be.  Harper didn’t let the fact that she lives in a hearing world deter her from doing the things she wanted to do.

*Please note that this book does contain domestic violence.*


You can read my 5 star review of Long Road Home here.

Marie Meyer is a teacher who spends her days in the classroom and her nights writing heartfelt romances. She is a proud mommy and enjoys helping her oldest daughter train for the Special Olympics, making up silly stories with her youngest daughter, and bingeing on weeks of DVR'd television with her husband.