An IRRESISTIBLE YOU Interview with Kate Meader 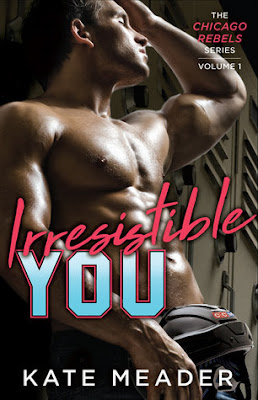 Three estranged sisters inherit their late father’s failing hockey franchise and are forced to confront a man’s world, their family’s demons, and the battle-hardened ice warriors skating into their hearts.
Harper Chase has just become the most powerful woman in the NHL after the death of her father Clifford Chase, maverick owner of the Chicago Rebels. But the team is a hot mess—underfunded, overweight, and close to tapping out of the league. Hell-bent on turning the luckless franchise around, Harper won’t let anything stand in her way. Not her gender, not her sisters, and especially not a veteran player with an attitude problem and a smoldering gaze designed to melt her ice-compacted defenses.
Veteran center Remy “Jinx” DuPre is on the downside of a career that’s seen him win big sponsorships, fans’ hearts, and more than a few notches on his stick. Only one goal has eluded him: the Stanley Cup. Sure, he’s been labeled as the unluckiest guy in the league, but with his recent streak of good play, he knows this is his year. So why the hell is he being shunted off to a failing hockey franchise run by a ball-buster in heels? And is she seriously expecting him to lead her band of misfit losers to a coveted spot in the playoffs?
He’d have a better chance of leading Harper on a merry skate to his bed…

Hi Kate.  Welcome back to Read Your Writes Book Reviews.  How are you?
I’m doing great, Kim. Thanks for having me!

You’re welcome.  Lucky for you, when I met you in Atlanta I hadn’t read In Skates Trouble, the prequel to your Chicago Rebels series.  I might have harassed you non-stop the entire time.  I know about this series, being the stalker I am, but can you tell readers about it?
The Chicago Rebels is a hockey romance series about three estranged half-sisters who inherit their late father’s beloved, down-on-its-luck hockey franchise and are forced to confront a man’s world, their family’s demons, and the battle-hardened ice warriors skating into their hearts. The first full-length novel is IRRESISTIBLE YOU, which features Harper the team owner/general manager, a woman with everything to prove and Remy, a veteran hockey player with nothing left to lose. IN SKATES TROUBLE, the prequel is loosely connected and sets up the world.

What was your inspiration behind the series?
Every story starts with a seed, and most sports romances start with the heroes, the driving forces of the team. But not so with the Chicago Rebels. Sure, the perfectly built athletes are crucial but with my next trilogy, I dared to do something a little different.

Thinking on how I would set my series apart from every other sports romance out there, I asked: Why not build it around the heroines? And so the Chicago Rebels were born.

We start with a will. (Retro romance!) Add in three daughters in dysfunctional relationships with their father and each other. (Shades of King Lear!) Throw them into a make-or-break situation requiring a successful season or the team will be sold off. (Every other sports movie from the eighties!) I loved the idea of these women figuring out how to work with each other, as well as with the heroes to get what they need, want, and desire. Also, there’s something a little subversive about having the women “own” the heroes financially before the stories start!

I love all the main characters for this series.  Does it become difficult to write heroes that melt your heart and heroines you want to be friends with?
Heroes are easier to write, to be honest, as long as you make them different enough from each other. I tend to make them alpha but with a flaw that’s their downfall (e.g. Eli in Playing with Fire is a truth bender when it suits him; Remy in Irresistible You is alpha to the core but so laid back that it’s messed with his head come playoff time). Heroines are harder, generally because readers are harder on them. If your heroine is considered even a little difficult, it can be off-putting, so she has to have a really good reason for being prickly or guarded or resistant to love, especially when the hero is near-perfect.

You balanced it all really well with Irresistible You.  Remy is perfect and I completely understand where Harper is coming from.  There’s a surprise to Clifford Chase’s will that caught Harper and myself off guard.  Subsequently, do the books overlap?  (i.e. In Irresistible You the Chase sisters are arguing over acquiring Vadim and the same scene is in So Over You.)
Actually no. I set the books up so that they would arc over one hockey season. It’s revealed fairly quickly in IRRESISTIBLE YOU that the sisters have to jointly run the team AND get the Rebels to the playoffs or the team will be sold off. So Book 1 takes place October to January. SO OVER YOU (Book 2) is February to April, so the road to the playoffs. Do they make it to the playoffs and keep the team? Find out in HOOKED ON YOU (Booked 3). There will also be a m/m novella – UNDONE BY YOU - that will release between Books 2 and 3; however its timeline will be the same as Book 2’s, so I’ll be dropping hints in SO OVER YOU about that book.

Note: there is one overlapping scene between the prequel, IN SKATES TROUBLE, and IRRESISTIBLE YOU. The epilogue in the prequel is in Addy’s POV; I retell that scene in Harper’s POV in IY.

Why did you choose to pair Harper up with Remy?  I have an idea, but I want your take.
Remy’s what I call a caretaker alpha—he’s family-oriented, a little older and wiser, and he’s ready to fall in love. Harper is not family-oriented and believes love is not for her. Her past relationships (boyfriends, mother, father, sisters) have all been disappointing, so she thinks she’s an island. That relying on herself will keep her safe from hurt. Someone as guarded and broken as Harper needs someone like Remy, a man who knows what love looks like because he lives it every day with his own family.

The book isn’t just about Remy breaking down Harper’s walls; it’s also about the sisters navigating their wariness and suspicion of each other and figuring out how to be a family. They’ve all been treated shoddily by their father in different ways and the story of them will take place over the three main books.

Next up is Harper’s half-sister Isobel and Vadim.  Tell me what readers can expect from them.
Oh, these two. I have to say I love this pairing because it’s a second chance romance with a twist. What’s the twist? Well, if you read the blurb, it’s not a big secret. Essentially, these two had a doomed teenage affair where Vadim took Isobel’s virginity—and did a bad job of it! In other words, he thought it went awesome, she thought “is that it?”, and now eight years later she’s his coach when he’s acquired by the Rebels. Vadim will find out that what he thought was an amazing experience was a big letdown for Isobel and he’s now determined to do her right!

This idea was so appealing (and funny) to me. Why do we assume every sexual experience in romance is out of this world? Not every 18 or 19 year old kid is an awesome lover right out of the gate. It was so much fun to bring these two together again, especially as Vadim can’t believe he screwed up! (He’s super dramatic and funnily Russian.) Their story also covers how athletes handle sports injuries, life after the big time, and professional jealousy, to name just some of the themes, as these two athletes figure out how to turn puppy love into something real and lasting.

I can’t wait to read it.  Kate, thank you so much for answering some questions for me.
Thanks for asking them!