Review ~ HIS KIND OF COWGIRL by Karen Rock 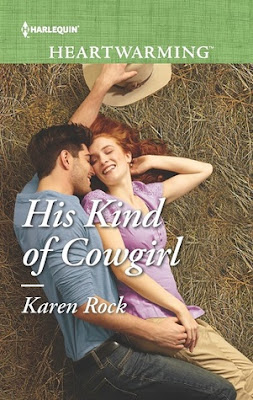 Would he still love her…if he knew?

Tanner Hayes smashed Claire's life to pieces when he chose the rodeo over her ten years ago. And now he'd wrecked her truck! Fantastic. She'd lost her husband, the family ranch was mired in debt, her father was recuperating from a stroke and her son was being bullied. Why not throw a reckless bull rider into the mix?

All she'd wanted was a safe, stable life. But with Tanner back in town—and staying on her ranch—nothing was safe, or under control. Not the feelings she'd fought so hard to forget. Not the son she was determined to protect. And certainly not her long-held secret…

I finally read Karen Rock!!  I love second chance love stories and His Kind of Cowgirl seemed liked a good read.  I read an excerpt and just wanted to find out how Tanner and Claire found their way back to each other.

Ten years ago, Tanner Hayes and Claire Shelton were two teenagers in love.  Both were very much involved in ranch life.  Tanner was a bull rider and Claire was a barrel racer.  Things for these two started to fall apart when Claire was in a very bad accident and then made Tanner choose between her and the rodeo.  Tanner choose the rodeo, not knowing that Claire was carrying his child and not telling her why the rodeo was so important to him.

Claire went on to marry and ultimately fall in love with a childhood friend and local mechanic.  Tanner went on to become a PBR World Champion.  Since he left Coltrane, Texas, the two have not spoken or seen each other.  Of course he heard about Claire from time to time through her father Martin.  Tanner even learned about the tragic death of Claire’s husband from Martin.  Now on the nine year anniversary of Claire’s marriage to Kevin, Claire and Tanner’s worlds collide.

Tanner has returned to Coltrane to heal from his injury and to help Martin save Denton Creek Ranch which has been in Martin’s family for a long time.  This is news to Claire, who has already made arrangements to sell the ranch for next to nothing in order to avoid foreclosure.  Claire wants Tanner to leave as soon as possible.  She doesn’t want him to get her father’s hopes up about saving the ranch and she definitely doesn’t want him to discover that he is Jonathan’s biological father.

So far, the set up for His Kind of Cowgirl is great.  Tanner was a great hero.  He may have his own personal reasons for wanting Martin’s ranch to succeed, but he does still want to help Martin.  If Martin has to lose his beloved ranch, he wants to go down fighting and Tanner is willing to fight just as hard.  Even more so, I loved Tanner because of the way he was with Jonathan.  While he didn’t know Jonathan was his son, he still treated him with respect.  He also helped him open up from the bubble Jonathan created for himself, which Claire allowed out of fear.

Claire was my least favorite character in the whole story.  Yes, life dealt her a bad hand or two, but she took it upon herself to try and control everyone’s life.  She consistently wavered between wanting to tell Tanner the truth about Jonathan and keeping him in the dark.  It was like she was punishing Tanner when he did something she didn’t like by keeping him in the dark.  This went on throughout the whole book.

If I could simply judge His Kind of Cowgirl based on the ending, it would get five stars.  The story brought tears to my eyes in a couple of places.  The moments between Tanner and Jonathan were heartwarming.  But Claire is a part of this story, a big part.  Her hot and cold attitude was irritating and made the story hard to read at times.  Claire’s sister Dani has her own story of romance.  Hopefully, she isn’t like her sister.

You can read an excerpt of His Kind of Cowgirl here.