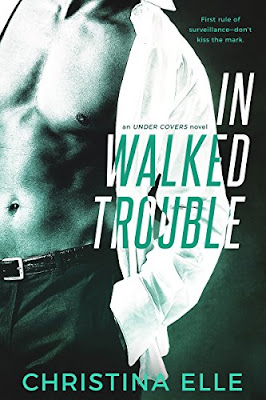 With a deadly target on his back, DEA agent Luke Calder’s plan is to drink away his impending demise. Except instead of getting blessedly drunk, in walks a woman with a much deeper story than she’s leading on. And he definitely wants to know more. Especially when he learns she might have intel he needs. He’s not cool with lying to her, but desperate times call for desperate measures. And what starts out as simple surveillance turns into so much more.

Cassandra Stone is having a bad night. Her boyfriend’s been cheating because she’s not “adventurous enough” in bed. So, she does the next logical thing—she goes in search of a dark, dangerous one-night stand. Instead, she finds smoldering eyes, deep dimples, and the killer smile of a guy who won’t leave her alone. Damn him. He says and does all the right things, making Cass believe that good men still exist. Until she learns why he took an interest in her in the first place.

Christina Elle is a new to me author.  In Walked Trouble is the second book in her Under Covers series and is a standalone read.  This book has captured my attention and has made me a huge fan.

In Walked Trouble picks up after the events of On Her Six, the first book in the series.  It opens with a funny meet cute of the lead characters, Luke Calder and Cassandra Stone.  The laugh out loud moments continue throughout the book, but don’t be fooled, the story does get serious and very deadly.

Luke Calder is a DEA Agent currently working in Baltimore.  He and his team are on the hunt for a drug lord who’s teamed up with a street gang and is distributing a deadly drug to teens at schools throughout Baltimore.  For Luke, finding drug lord Jose Serrano is extremely important and goes far beyond just this case.  After the events of On Her Six, Luke has a target on his back and Jose wants him dead.

Cassandra “Cass” Stone is full of passion and heart.  She’s a Guidance Counselor at John C. Carver High School, a school full of underprivileged students with an extremely low graduation rate.  Cass sees potential in a lot of her students, unfortunately, her students themselves don’t always see it.  It doesn’t help that their families would prefer for them to bypass high school and college and either work at a minimum wage job or become a member of the local street gangs.  One of those students is Miguel Cortez and Cass will do anything to make sure he is safe and goes to college on the full scholarship he’s earned.

When Cass stumbles upon an undercover surveillance Luke and his team are conducting, she unknowingly becomes Luke’s new assignment.  He has to get close to Cass to find out what she knows about the drugs and how the kids are getting them.  However, this new assignment is about to get messy very quickly.  Real feelings get involved and Cass refuses to sit on the sideline and allow Miguel to become just another statistic.

Christina Elle has woven together a wonderful romantic suspense that captures your attention from page one and takes you on an incredible ride.  You can’t help but fall for Luke with his easy going ways and charm.  Cass is so easy to like.  Her heart guides her and yes, it gets her into trouble, but you have to admire her passion and determination.  But Christina doesn’t just stop at incredible leads, the secondary characters also add to the story.  The bromance between Luke and his teammates is really something to behold.  Let’s not forget about the suspense.  There were moments that left me breathless, as well as on the verge of tears.

I now have to go back and read the first book in this series and sit on pins and needles, waiting for the next book to come out.

You can read my interview with Christina here, as well as an excerpt of In Walked Trouble.