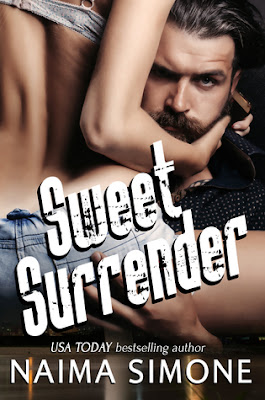 The price of surrender is passion…

Hayden is no longer the naive girl who once fiercely loved a golden Sutherland and believed he and a maid's daughter could live happily ever after. Griffin broke her all those years ago, but she forced herself to pick up the pieces and move on. Now he’s back in Texas, acting the part of the proper, dutiful son. But there’s nothing proper about the detailed—dirty—descriptions of how he wants to touch her…take her… Though her body heats every time he’s near, she refuses to surrender to his special brand of passion. Griffin may have returned home, but he's leaving again. And this time he won't take her heart with him…

Naima Simone’s Sweet Surrender is a second chance love story.  Five years ago, Griffin Sutherland left a heartbroken Hayden Reynolds in his wake, as he hightailed it out of Houston and away from his controlling, snake in the grass father for Florida and parts unknown.

A summons from his father and a promise to a little girl brings these two back together again, only to discover that sparks and passion still exist and burn hotter than ever.

Griffin Sutherland is my new book boyfriend!  I am now a fangirl of the full beard and the man bun.  Griffin is a dirty dirty talker, with the mad skills to back up his words.  He’s honorable, compassionate, tender, and loyal.  He’s his own self-made man.  Hayden is a survivor.  She’s determined to make something out of her life and is driven to succeed.  Her one kryptonite is Griffin and she’s about to find out that “Love is sacrifice, trust, commitment. Forever.”