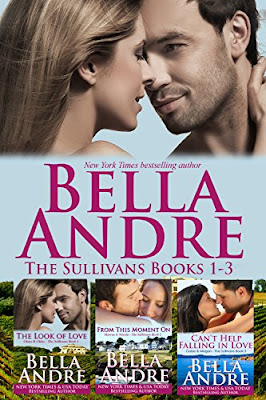 More than 6 million readers have already fallen in love with the Sullivans! Now get ready to meet your new favorite family in Bella Andre's New York Times and USA Today bestselling contemporary romances with the first three books in the #1 hit series.

"Not since Nora Roberts has anyone been able to write a big family romance series with every book as good as the last! Bella Andre never disappoints!" Revolving Bookcase Reviews

THE LOOK OF LOVE

Chloe Peterson is having a bad night. A really bad night. The large bruise on her cheek can attest to that. And when her car skids off the side of a wet country road straight into a ditch, she's convinced even the gorgeous guy who rescues her in the middle of the rain storm must be too good to be true. Or is he?

As a successful photographer who frequently travels around the world, Chase Sullivan has his pick of beautiful women, and whenever he's home in San Francisco, one of his seven siblings is usually up for causing a little fun trouble. Chase thinks his life is great just as it is--until the night he finds Chloe and her totaled car on the side of the road in Napa Valley. Not only has he never met anyone so lovely, both inside and out, but he quickly realizes she has much bigger problems than her damaged car. Soon, he is willing to move mountains to love--and protect--her, but will she let him?

FROM THIS MOMENT ON

For thirty-six years, Marcus Sullivan has been the responsible older brother, stepping in to take care of his seven siblings after their father died when they were children. But when the perfectly ordered future he's planned for himself turns out to be nothing but a lie, Marcus needs one reckless night to shake free from it all.

Nicola Harding is known throughout the world by only one name - Nico - for her catchy, sensual pop songs. Only, what no one knows about the twenty-five year old singer is that her sex-kitten image is totally false. After a terrible betrayal by a man who loved fame far more than he ever loved her, she vows not to let anyone else get close enough to find out who she really is...or hurt her again. Especially not the gorgeous stranger she meets at a nightclub, even though the hunger - and the sinful promises - in his dark eyes make her want to spill all her secrets.

Gabe Sullivan risks his life every day as a firefighter in San Francisco. But after learning a brutal lesson about professional boundaries, he knows better than to risk his heart to his fire victims ever again. Especially the brave mother and daughter he saved from a deadly apartment fire...and can't stop thinking about.

Megan Harris knows she owes the heroic firefighter everything for running into a burning building to save her and her seven-year-old daughter. Everything except her heart. Because after losing her navy pilot husband five years ago, she has vowed to never suffer through loving - and losing - a man with a dangerous job again.

Hi Bella.  Welcome to Read Your Writes Book Reviews.  How are you today?
I’m doing great. Thanks so much for welcoming me to your blog today.

The Sullivans.  The Sullivans are one of those families that you remember.  The series has been around since 2013.  It’s produced two spinoffs and just seems to keep going.  Honestly, did you ever expect it to be this successful?
I definitely didn’t expect the Sullivans to become such a runaway hit. The biggest surprise has been how much my books have been embraced by readers all over the world. It’s such a thrill to have such wonderful, enthusiastic readers in so many countries! I love all the different covers, which are all so beautiful. And I love getting fan mail in other languages. I’m always so touched that people take the time to write to me to let me know that my books have touched their hearts or made them smile.

I admit that I haven’t read all the books.  Don’t gasp. Don’t give that look.  I have read the three we’re promoting today.  As I said, years later I still remember them.  Counting the novellas, there are 20 books.  Are they all standalones?
They are! They are all interconnected since the characters are related, which is why many readers prefer to read the books in order. But the great thing about the books being standalones is you can start anywhere and you won’t be confused.

How do you manage to keep the series fresh?
Love is different for every single person and every single relationship. Writing romance is naturally fresh and fun, because each couple has such different obstacles to allowing love into their lives and love changes each of them in different ways too. It just never gets old!

How do you keep track of all the characters and their love stories, so nothing is repeated?
For me, the Sullivans feel like real, living, breathing people—not just characters in books. I do have a really big and detailed spreadsheet with information about each of them (ages, kids, jobs, eye color, pets, engagements, marriages, etc), but I am so invested in my characters lives that I really enjoy getting to write “reunion” scenes with them in each book.

The San Francisco Sullivans started it all, and for good reason. From sexy fashion photographer Chase, to charming vineyard owner Marcus, and famous movie star Smith, these heroes have it all!

Ever wished a handsome billionaire would come and sweep you off your feet? Or perhaps you'd like to sail around the world with a swoon-worthy hunk of your own? Don't miss the Seattle Sullivans!

The New York Sullivans are the newest sexy heroes to hit the scene. Will you fall for brooding artist Drake or will it be the protective bodyguard Roman who takes you into his arms and makes you his forever? There's only one way to find out!

What’s next for you and the Sullivan clan?
I’m busy writing the next installments of the Sullivans (YOU DO SOMETHING TO ME, Alec Sullivan’s story, New York Sullivans 3, coming October 11th), the Morrisons (LOVE ME LIKE THIS, Justin’s story, coming January 2018) and the Maverick Billionaires (WILD IN LOVE, Daniel’s story, coming April 2018).

Bella, thank you so much for answering some questions for me!

You can read an excerpt of The Look of Love here.

Bella Andre is the New York Times, USA Today and Publishers Weekly bestselling author of "The Sullivans", "The Maverick Billionaires", "The Morrisons", and the NYT bestselling "Four Weddings and a Fiasco" sweet romance series written as Lucy Kevin.

Having sold more than 6 million books, Bella Andre's novels have been #1 bestsellers around the world and have appeared on the New York Times and USA Today bestseller lists 32 times. She has been the #1 Ranked Author at Amazon (on a top 10 list that included Nora Roberts, JK Rowling, James Patterson and Steven King), and Publishers Weekly named Oak Press (the publishing company she created to publish her own books) the Fastest-Growing Independent Publisher in the US. After signing a groundbreaking 7-figure print-only deal with Harlequin MIRA, Bella's "The Sullivans" series is being released in paperback in the US, Canada, and Australia.

Known for "sensual, empowered stories enveloped in heady romance" (Publishers Weekly), her books have been Cosmopolitan Magazine "Red Hot Reads" twice and have been translated into ten languages. Winner of the Award of Excellence, The Washington Post called her "One of the top writers in America" and she has been featured by Entertainment Weekly, NPR, USA Today, Forbes, The Wall Street Journal, and TIME Magazine. A graduate of Stanford University, she has given keynote speeches at publishing conferences from Copenhagen to Berlin to San Francisco, including a standing-room-only keynote at Book Expo America in New York City.

If not behind her computer, you can find her reading her favorite authors, hiking, swimming or laughing. Married with two children, Bella splits her time between the Northern California wine country and a 100 year old log cabin in the Adirondacks.