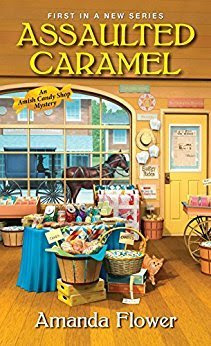 Sometimes you need a sweet tooth to take a bite out of crime . . .

Bailey King is living the sweet life as assistant chocolatier at world-famous JP Chocolates in New York City. But just when Bailey’s up for a life-changing promotion, her grandmother calls with news that her grandfather’s heart condition has worsened. Bailey rushes to Harvest, Ohio, where her grandparents still run Swissmen Sweets, the Amish candy shop where she was first introduced to delicious fudge, truffles, and other assorted delights.

She finds her grandfather is doing better than she feared. Unfortunately, the same can’t be said for a local English developer, whom Bailey finds dead in the candy shop kitchen—with Jebediah King’s chocolate knife buried in his chest. Now the police are sweet on her grandfather as the prime suspect. Despite the sincere efforts of a yummy deputy with chocolate-brown eyes, Bailey takes it on herself to clear Jebediah. But as a cunning killer tries to fudge the truth, Bailey may be headed straight into a whole batch of trouble . . .

Twenty-seven-year-old Bailey King rushes from New York City to her grandparents’ Amish community of Harvest, Ohio, when her grandmother calls to let her know that her grandfather has been taken to the hospital.  Upon arriving at her grandparents’ home and candy shop, Swissmen Sweets, Bailey spies her grandfather in a heated argument with a non-Amish man.  Turns out the man is developer Tyson Colton and he has been buying up Amish businesses in the area with the hopes of turning Harvest into an Amish Disneyland.

Bailey later stumbles upon the body of Tyson where he shouldn’t be, in the kitchen of Swissmen Sweet, with a chocolate knife in his chest.  Police are quick to assume that either Bailey or her grandfather killed Tyson.  Bailey vows to prove herself and her grandfather innocent before it’s too late.

Amanda Flowers has definitely written a good mystery with fantastic characters.  Bailey’s best friend, Cass adds humor to the story.  Deputy Aiden Brody proves to be a good friend to Bailey and hopefully a romantic love interest as well.  While I was busy wishing I could visit Harvest, Ohio and interact with everyone, I forgot about the murder needing to be solved.  I can only say that the twists and turns were mind-blowing.  I can’t wait to return to Harvest and Swissmen Sweets.