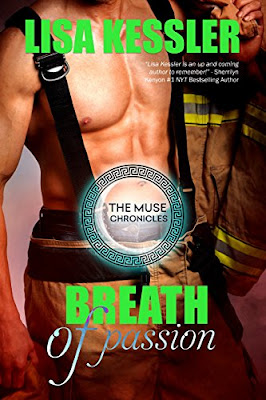 Erica Sterling owns her curves, and inspires passion in every person she meets. It's the curse of having the Greek muse, Erato, lurking in her soul. After a hot night with a firefighter, she struggles to keep her distance from him. The gods have other plans, but Erica has crossed the line between passion and obsession once before, and she's never going back. Not even for her Guardian.

No one understands fire and heat like firefighter, Reed McIntosh. After being burned by a bad marriage, he's sworn off love. But he's never been with anyone like Erica, and after meeting her, a dormant ability is awakened inside of him, along with the desire to keep her safe.

When a stalker's threats turn up the heat, Reed will put his life ---and his heart--- on the line. But when the ashes settle, will love be too late?

I know absolutely nothing about Greek mythology.  I mean seriously, it’s all Greek to me.  But I’m in love with Lisa Kessler’s Muse Chronicles series.  A good thing about this series is that you don’t have to know or understand Greek mythology.  You learn what you need to know through the characters.

Breath of Passion is the third book in the Muse Chronicles series and is easily a standalone read.  If you haven’t read the first two books, this one seems to catch you up.  Erica Sterling is a human and one of nine women chosen by the Gods to be reborn as a daughter of Zeus.  Her destiny, along with the others is to reopen a dilapidated theater and help inspire mankind through arts and science.  The Gods knew that the Muses would face obstacles and challenges, thus they also selected nine men called guardians to fall in love with and protect the daughters.  Federal Fire firefighter Reed McIntosh has been marked as a guardian.

The two first met at the end of the second book, Legend of Love and sparks definitely flew. While Reed is all for seeing where the sparks lead, he isn’t looking for a relationship.  His ex-wife has turned him off to trusting and loving women.  Reed’s anti-relationship stance suits Erica just fine.  After believing that she drove her last boyfriend over the edge, she’s not looking for a relationship.  The two share one amazing night together, with Erica dodging any attempts Reed makes to see her again.  However, things change when an arsonist seems to start targeting Erica before setting their sights on Reed.  While the Muses haven’t seen or heard from The Order of the Titans (a group who believes that Kronos needs to be freed from the center of the Earth and bring back the Golden Age of Man) they continue to watch and be a threat.

I’ve read all the books in this series and I have to say that Breath of Passion seems to be a game changer for the Muses and members of The Order.  Lines will be drawn and new enemies emerge.  So far, Breath of Passion is the sexiest book in the series.  Erica is the Muse of passion, after all.  What had me so invested in the story was not only the characters, but also all the emotions it stirred.  There was a lot of happy squealing going on on my part.  But there was also tears and sorrow.  I need the next book in this series NOW!!


Her short stories have been published in print anthologies and magazines, and her vampire story, Immortal Beloved, was a finalist for a Bram Stoker award.


When she's not writing, Lisa is a professional vocalist, performing with the San Diego Opera as well as other musical theater companies in San Diego. You can learn more at http://Lisa-Kessler.com.