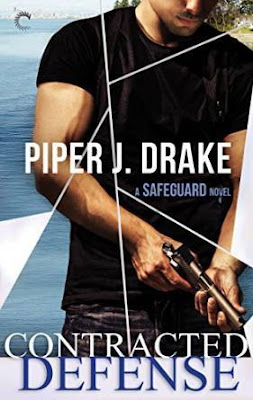 Time is running out and the enemy is at the gate.

Adam Hicks may be the rookie at Safeguard, but he’s no novice in the field. Retired from active duty after multiple tours and back fresh from a brief rest in New Zealand, he’s itching to return to action. But the challenge he hoped for arrives in an unexpected form: his sexy yet stern new partner.

The last thing Victoria Ash wants is to work with the new guy—especially one as gorgeous as Adam. His relaxed attitude about their first “easy” assignment together—setting up a private home defense network for a reclusive client—doesn’t impress her. Easy usually means trouble. She’s proved right when Adam discovers that the multiple incursions on the physical and cyber security systems aren’t just glitches. They’re under attack…and there’s a traitor in their midst.

As tension mounts, so does the attraction between Victoria and Adam. They must protect their client and the research he’s desperately trying to keep secret. Working together, they have to find the mole before their defense measures, in the fortress and online, are compromised and the deadly secrets they’ve sworn to protect are revealed.

Contracted Defense is the third book in Piper J. Drake’s Safeguard series, which focuses on members of an elite security agency called Safeguard.  I have also read the second book, Deadly Testimony, but not the first one, Hidden Impact.  There is enough backstory mentioned throughout the book that it can be read as a standalone.

In this installment, the focus is on Safeguard Security Expert Victoria Ash and her new partner Adam Hicks.  Victoria comes in contact with Adam in a very interesting and passionate way.  After dispatching some belligerent bar patrons while attending a party at a hotel, Victoria and Adam have what they expected to be a one night stand between two strangers.  Everything changes the next day when they find out that they are partners.  Ever the professional, Victoria advises Adam to forget what happened the night before.  However, Adam has different ideas and makes it clear to Victoria that he still intends on pursuing her after their assignment is over.  Instead of following the usual script, Victoria doesn’t shut him down.  She decides to go outside of her comfort zone and keep an open mind.  They soon find out that their relationship isn’t the most complicated piece of the mission.  Their client is keeping secrets which make it very difficult to protect him and they have other enemies within their midst.

I really liked Contracted Defense.  It was packed with several very steamy moments between Victoria and Adam.  They had plenty of sparks between them and had no problem with creating those sparks in places outside of the bedroom.  Plus, there was some hand to hand combats and gun battles.  The story played out like a Hollywood action movie at the end.  The writing was great and I really felt like I was in the middle of everything.  If there is another book, I will definitely have to read it.

**Received a copy from Carina Press and reviewed voluntarily.**


Now, PJ is exploring the complexity of romantic suspense, incorporating her interests in mixed martial arts and the military into her writing.