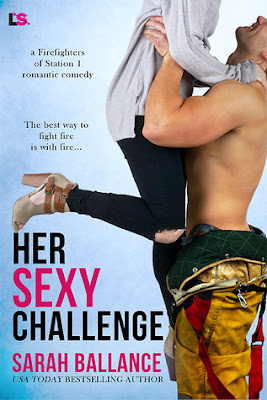 The best way to fight fire is with fire…

She might be the one fire he can’t put out…

Caitlin Tyler doesn’t do bridges—she just doesn’t know it until she lands her dream job and freezes halfway across her new town’s towering death span. Cue the cocky, infuriating fireman who goads her off the bridge. He’s hot, but he’s also exactly the kind of guy she wants to avoid…which she manages to do for a whole four hours.

Lt. Shane Hendricks is only two weeks away from leaving Dry Rock. He sure as hell doesn’t need to get involved with a woman he has to rescue twice in one day. The fact that she’s clearly annoyed by him doesn’t deter him from throwing down a challenge—one that proves hard to resist for all the wrong reasons.

They’re moving in different directions. Leaving should be easy, but falling for Caitlin might be the one fire he can’t put out…

I LOVED Her Sexy Challenge.  The story consistently had me either smiling or laughing.  I’m not even sure how that happened.  Sarah Ballance is definitely proving to be an author who can lift my spirits.  In addition to all the humor, Sarah has written extremely likeable characters.  Caitlin Tyler  has to learned to overcome her phobias and the frightening events of her youth.  Shane Hendricks has to learn to live for himself and not the memory of a ghost. I loved watching these two get to know each other and fall in love.

I’m extremely happy that Her Sexy Challenge is the start of a new series for Sarah.  There are some amazing secondary characters who promise to be just as funny in their quest for love as Caitlin and Shane.  I can’t wait for the next installment in the Firefighters of Station 1 series.