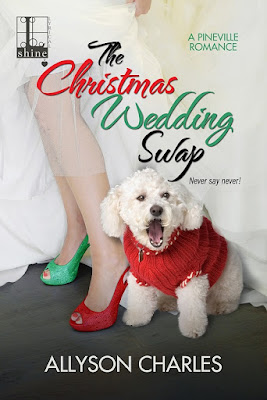 SOMETIMES YOU GET WHAT YOU NEED . . .

Allison Stuart has always been the odd-woman-out of her family. She wears her jeans a little too tight, colors her hair a little too blonde, and instead of going into medicine and law like her sisters, she runs a diner. She’s also the only single sibling left. And while she won’t change her style, and her meatloaf is to die for, thank you very much, she wouldn’t mind her share of wedded bliss. So she makes an early New Year’s resolution: No more meaningless flings.

Drop-dead sexy Luke Hamilton is everything Allison has sworn off. His only serious relationship has been with his five-star restaurant, Le Cygne Noir, in Chicago. When he’s threatened by a lawsuit, Luke decides to hide out in Pineville, Michigan, until the statute of limitations runs out. The small town is filled with Christmas charm, but he can’t imagine living there. Heating things up with the hottie who owns the local diner would make his exile bearable—if he can convince her to give up her ridiculous resolution . . .

“Is this restaurant a step down for you?” Allison asked sweetly. She twirled the tip of the cleaver in a circle. “Is my kitchen not up to your usual standards?”

Luke appeared to have more balls than brains. He stood firm. “A kitchen can always be improved. Yours is no exception.”

He was giving her an ulcer. Allison’s stomach grumbled in complaint, and she knew just how it felt. There were some things that just weren’t done, and criticizing your boss’s kitchen was one of them. “Hasn’t anyone ever taught you not to piss off a woman holding an eight-inch blade?”

“That’s a solid piece of advice,” Delilah said in agreement.

Luke threw his hands in the air. “Fine. I think you’re making a mistake, but it’s your restaurant.”

Luke’s lips twitched, and he rocked back onto his heels. “I’d heard your nickname was the Tyrant, but I couldn’t see it till now.”

“I mean it as a compliment,” Luke said. “You don’t let anyone push you around. There’s absolutely nothing wrong with that.”

Luke traced a finger along the slick metal surface of the counter, his eyes hot, and Allison felt it as though his finger danced along her spine. She could see in his expression that he meant it. He did find her take-charge attitude a turn-on. And damn if that didn’t make her go a little weak in the knees. Still, she couldn’t let that claim go unchallenged.

“No?” Delilah jumped in.

Allison’s jaw grew stiff. If she could incinerate people with the heat of her glare, her restaurant would be down two cooks. They’d be nothing but little piles of dust. “Not no. And not Tyrant. My employees love me.”

Peals of laughter rang through the kitchen.

Allison wagged the knife in the air. “Delilah, that advice about being nice to the woman holding a knife? It goes for you, too.” Spinning, she hammered the cleaver into her cutting board, the blade plunging a quarter inch into the wood. She stepped back, and the cleaver stood upright, quivering in its new slot. With a pointed look at her cooks, she stormed to her office.

The hoots of amusement behind her back rather diminished the effect of her exit.

Allyson Charles lives in Northern California. She’s the author of the "Pineville Romance" series, small-town, contemporary romances published by Lyrical Press. A former attorney, she happily ditched those suits and now works in her pajamas writing about men’s briefs instead of legal briefs. When she’s not writing, she’s probably engaged in one of her favorite hobbies: napping, eating, or martial arts (That last one almost makes up for the first two, right?). One of Allyson’s greatest disappointments is living in a state that doesn’t have any Cracker Barrels in it.