Review ~ LIGHT OF THE SPIRIT by Lisa Kessler 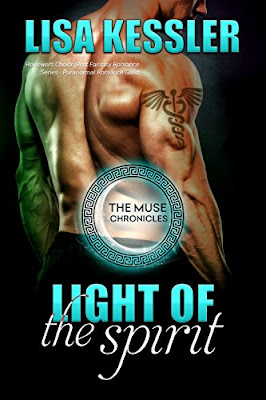 As the mortal vessel for the Muse of Comedy, Lia Youlos lights up every room with laughter and smiles. But there are darker forces at work, and they want to snuff out her light forever.

Cooper Hanover is a hardworking paramedic who healed Lia after a fire, but something happened that day, something medical science couldn't explain. And if he doesn't figure out how it works soon, the next healing could kill him.

Lia's smile and sharp wit tempt him to love again, and he's not going to let anyone, not even the gods, take her from him.

I absolutely LOVE Lisa Kessler’s Muse Chronicles series.  The series combines the present day world with Greek mythology.  It isn’t necessary to have knowledge of Greek mythology before reading this series.  In my opinion, I think it’s better if you don’t.

Lia Youlos was destined to be a muse from birth.  Her Greek parents even named her Thalia, after the Muse of Comedy.  In this generation of muses, Lia just so happens to be the Muse of Comedy; making people smile and laugh is her passion.  After feeling responsible for the death of his sister, Cooper Hanover changed from the easy going, fun-loving guy he use to be be.  He’s now almost always serious and has pretty much forgotten what it’s like to laugh and smile.  He’s a paramedic for Crystal City and he loves what he does.

Lia and Cooper first meet when the theater Lia and her muse sisters are restoring catches fire. Something extraordinary happens that night, but it results in Cooper landing in the hospital. Now, he feels a little rattled and is afraid to return to the job he loves.  It seems that something big is on the horizon and the gods need Cooper to be the guardian he was chosen to be.

Light of the Spirit reveals some surprising information regarding the muses and The Order of the Titans who are a group that has been around as long as the various nine daughters of Zeus.  The Order needs to stop the muses who want to inspire mankind through arts and science.  Their ultimate goal is to release the Titans from their prison of Tartarus and bring back the Golden Age of Man.  Things are changing and old enemies unite as a new enemy emerges.  I can’t wait for Devoted to Destiny, the next book in this series.