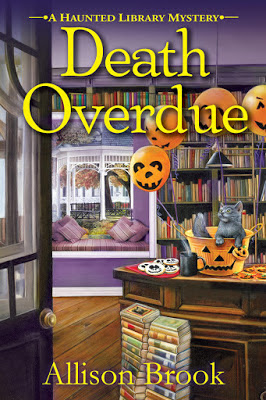 Carrie Singleton is just about done with Clover Ridge, Connecticut until she's offered a job as the head of programs and events at the spooky local library, complete with its own librarian ghost. Her first major event is a program presented by a retired homicide detective, Al Buckley, who claims he knows who murdered Laura Foster, a much-loved part-time library aide who was bludgeoned to death fifteen years earlier. As he invites members of the audience to share stories about Laura, he suddenly keels over and dies.

The medical examiner reveals that poison is what did him in and Carrie feels responsible for having surged forward with the program despite pushback from her director. Driven by guilt, Carrie's determined to discover who murdered the detective, convinced it's the same man who killed Laura all those years ago. Luckily for Carrie, she has a friendly, knowledgeable ghost by her side. But as she questions the shadows surrounding Laura's case, disturbing secrets come to light and with each step Carrie takes, she gets closer to ending up like Al.

Now it's due or die for Carrie in Death Overdue, the delightful first in a new cozy series by Allison Brook.

Carrie Singleton is like a rolling stone. She’s never in one place very long, and as a result doesn’t have any close friends. She returns to Clover Ridge, Connecticut, a place she use to spend her summers as a child at the request of her aunt and uncle. But after being in town and working at the local library for five months, she’s ready to move on. To her surprise, she’s offered the job of Head of Programs and Events. When she accepts the job, she gets more than she bargained for.

Carrie’s first big event is a presentation put on by former police detective Al Buckley. Fifteen years ago, Al was the detective in charge of the investigation into the murder of Laura Foster. Laura was a well-known and beloved library aide who was killed in her home. After spending so much time at the bottom of the bottle and possibly missing clues, Al is sure he now knows who killed Laura. With Laura’s family and friends in attendance for the presentation, Al kills over and dies less than ten minutes in. Carrie feels responsible for Al’s death. If only she would have cancelled the program when Laura’s oldest son showed up upset. Now, she’s teaming up with Laura’s youngest son, Jared, to find out who killed Al and possibly Laura.

Allison has created likeable characters from Carrie herself to her aunt and uncle, to Carrie’s new landlord Dylan. She’s even added a ghost to help Carrie navigate her new job. Death Overdue was a story that I found very easy to lose myself in. Once I picked it up, I didn’t want to put it down. The mystery was great. I loved the little curve thrown in that kept me guessing. I had no idea until the end who the killer was. I also loved the possibly of a romance for Carrie. I’m looking forward to the next book in this series.

You can read my character interview with Carrie here.