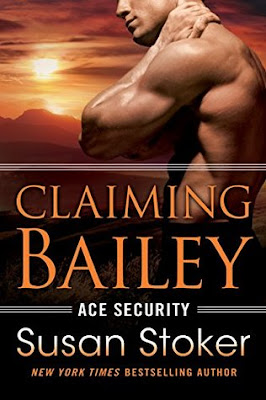 Bailey Hampton will do whatever it takes to keep both herself and her little brother safe from the vicious Inca Boyz gang. Hiding out in Castle Rock, Colorado, is only a temporary solution until she can earn enough money to get out of the state altogether. But when she meets handsome security nerd Nathan Anderson, she discovers a reason to stay and fight for what she wants.

Ace Security’s Nathan Anderson has always been the “numbers guy,” not the man any of the firm’s clients look to when their safety is threatened. But from the first time he ran into Bailey, she never made him feel like less of a protector than his brothers. Nathan was attracted to the petite, black-haired pixie with wild tattoos from the start, and by some miracle, she seems to return his interest.

But danger stalks Bailey and her brother, so it’s up to Nathan to channel his inner alpha and find a way to end the threat to their lives once and for all—and he’s not giving up Bailey without a fight.

Claiming Bailey is the third book in Susan Stoker’s Ace Security series. It can be read as a standalone but I think you will appreciate the characters a lot more if you read the previous books first. The main theme throughout all of the books is protecting people that have been abused. Ace Security was formed by Fraternal Triplets Logan, Blake, and Nathan as a tribute to their father Ace who was killed by their abusive mother. Logan and Blake are more of your typical alpha male military types while Nathan is the self-deprecating computer geek. Logan and Blake literally claimed their true loves in the previous books. Nathan pursues his true love in this one.

Bailey Hampton has led a difficult life that has forced her to go into hiding with her little brother Joel. She feels that her bad choices involving a gang called the Inca Boyz have made her damaged goods. She is a great mechanic but she has a very low self-esteem. She inadvertently runs into Nathan while he is having car trouble and both of their lives change forever. Nathan has been trying to find Bailey so that he can protect her from impending danger that he was only aware of because of Ace Security’s recent run-in with members of the aforementioned Inca Boyz. Nathan has no idea that his heart will literally skip a beat when he meets the overly-tattooed Bailey, but he was willing to embrace it. Nathan is not your typical protector which makes me much more interested in seeing him succeed and get his happy ever after. He doesn’t think that a woman like Bailey would have any interest him which is funny because she feels the same way about Nathan for different reasons.

The baggage that Nathan and Bailey have could feel an airport. They were meant to be together so that they could build each other up. In addition, Nathan becomes an awesome role model for Joel who has suffered some serious psychological damage at the hands of Bailey’s ex. Claiming Bailey is filled with emotion and trauma. There isn’t much in terms of action unless you count what happens in the bedroom. Nathan and Bailey heat up the sheets in the best way. Claiming Bailey was far from predictable and the ending sets up the next book nicely.