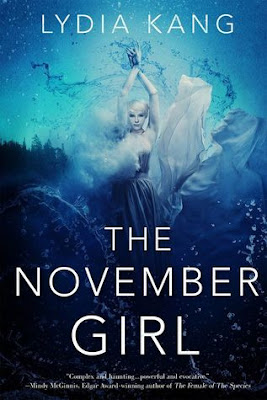 I am Anda, and the lake is my mother. I am the November storms that terrify sailors and sink ships. With their deaths, I keep my little island on Lake Superior alive.

Hector has come here to hide from his family until he turns eighteen. Isle Royale is shut down for the winter, and there's no one here but me. And now him.

Hector is running from the violence in his life, but violence runs through my veins. I should send him away, to keep him safe. But I'm half human, too, and Hector makes me want to listen to my foolish, half-human heart. And if I do, I can't protect him from the storms coming for us.

When I was a young child I was super nervous and excited to get on a plane for the first time. It was like Christmas Eve and I couldn't sleep. I remember flipping through the tv channels and I ended up watching Tales From the Crypt. Big mistake. The episode featured a witch on the engine of the airplane ripping it apart. I cried myself to sleep. The next morning, I was sure our plane was going to crash and demanded that my father build a bridge from the US to Europe. Yeah, that didn't happen. The purpose of my story is to say that if you have a fear of sailing or being on any form of a ship, The November Girl could actually scare you. There is one vivid scene which will have you on the edge of your seat.

Lydia Kang has used the Gordon Lightfoot song, The Wreck of the Edmund Fitzgerald, as inspiration to pen the tale of two souls at a critical time in their young lives.

As with a lot of stories, The November Girl was born out of a myth. Anda is the November witch and feared by men. She brings storms and takes the lives of sailors. It's how she's able to sustain herself. Anda Selkirk is an enigma. She’s half human and half supernatural. As the years have passed, she has started to lose the part of her that makes her human. People see her without actually seeing her. This is until seventeen-year-old runaway Hector Williams spots her standing on the shoreline of Isle Royale. They make eye contact and then feel a weird connection.

With the island being deserted, except for them, they bond and start to lean on each other. Both are fighting for their own freedom. Hector needs to hide out for the next five months until he is eighteen so that he can escape his abusive uncle. Anda is fighting to retain what little bit of humanity she has left. Nature and the elements will take these two to their breaking points. When the unthinkable happens, Anda will embrace what she is to protect what she loves. Lives will be lost but you as a reader will never look at a storm the same again. Prepare to lose yourself in an incredible story of friendship, love, and sacrifice.

Lydia Kang is an author of young adult fiction, poetry, and narrative non-fiction. She graduated from Columbia University and New York University School of Medicine, completing her residency and chief residency at Bellevue Hospital in New York City. She is a practicing physician who has gained a reputation for helping fellow writers achieve medical accuracy in fiction. Her poetry and non-fiction have been published in JAMA, The Annals of Internal Medicine, Canadian Medical Association Journal, Journal of General Internal Medicine, and Great Weather for Media. She believes in science and knocking on wood, and currently lives in Omaha with her husband and three children.