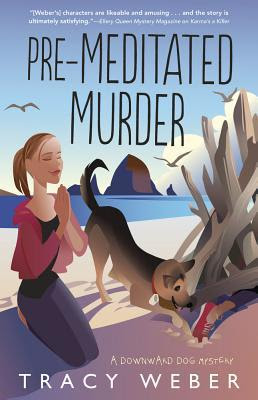 If Kate Doesn't Act Fast, the Only "I Do" in Michael's Future Will Be at His Trial

Yoga instructor Kate Davidson is ready to marry her boyfriend Michael, so she's disappointed when a special dinner doesn't end with a proposal. But disappointment turns to dismay and outrage as she learns the real problem: Michael is already married and his estranged wife is blackmailing him.

When his wife's body is found--by Kate and her dog, no less--Michael is strangely unable to remember where he was the night she died. Since Michael has no alibi, Kate steps up to uncover what happened. What she walks into is a tangled web of deceit, obsession, and immigration fraud . . . with Michael trapped in the middle.

Things Were Great Until I Dug Up a Body
By Bella, the canine hero of Pre-Meditated Murder

Actually, the title of this post is a lie. Things haven’t been great for over a week. My two humans went to a special dinner, and when they came home, they were fighting. Bad. The worst fight I’ve ever seen them have. A couple of hours later, the male human (Michael) packed a suitcase and left.

He hasn’t come back to the house since that night.

Kate, my female human, has been upset ever since. When Kate and Michael took me to Cannon Beach, Oregon, two days ago, I was so excited! I thought for sure that we were going on a fun vacation. But once we got here, Michael left to stay with his sister. I love Kate. She’s my best-trained slave. But the house feels lonely without Michael. After all, he’s the Cookie Man!

Who knew things were going to get worse?

Yesterday, Kate took me for a long romp on the beach, which was so much fun! I ran, and I smelled seaweed, and I chased sticks, and I harassed seagulls. On the way back to the rental house, though, I picked up a bad scent. The scent of death. Normally, I love that smell. I usually roll in it so I can take it home with me. But this time, death smelled bad. Death smelled human. I may live in Seattle, but even a city dog like me knows that humans aren’t supposed to be buried under driftwood at the beach.

So naturally, I excavated.

And that’s when everything went crazy. Turns out, Kate and Michael knew the woman I found! They call her Michael’s “wife.” I don’t know what that word means, but Kate doesn’t like it at all. It might even be as bad as the word “mailman.”

Ever since I found the body, people in dark blue uniforms keep dropping by the house unannounced, and Michael and Kate lock me in the bathroom. The indignity! Everyone knows German shepherds are supposed to chase uniformed people off their territory. Kate says they are the police, but those blue uniforms don’t fool me. They’re really USPS drivers in disguise.

The good news is that Michael and Kate aren’t fighting with each other anymore, but they still aren’t staying together at the house and the smells of stress and anxiety permeate their clothes. I’m really worried about them, but I don’t know how to help.

What do you think I should do?

series featuring yoga teacher Kate Davidson and her feisty German shepherd, Bella. Tracy loves sharing her passion for yoga and animals in any form possible. Her first book, Murder Strikes a Pose won the Maxwell Award for Fiction and is a 2015 Agatha award nominee for Best First Novel.

Bella was based on my own special needs German Shepherd, Tasha, who passed away in 2016.

Tracy and her husband live in Seattle and now share their home with their new and incorrigible German Shepherd pup, Ana. When she’s not writing, she spends her time teaching yoga, walking Ana, and sipping Seattle cider at her favorite local ale house.

You can follow the Pre-Meditated Murder Blog Tour here.

a Rafflecopter giveaway
Follow
Posted by Kim at 5:51 AM