Review ~ BARGAINING WITH THE BOSS by Jennifer Shirk 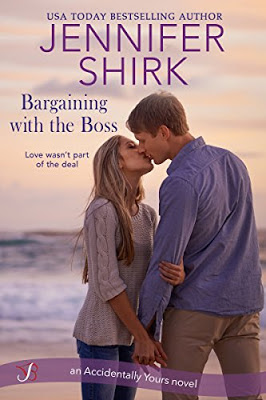 Kinsley just wanted to have some fun for a change. Then she wakes up in a stranger’s bed, with her bridesmaid dress on backward and a hazy memory of what happened at her friend’s wedding. With a quick escape, she can get back to her predictable life. But then she meets her new boss—the same guy she’d woken up next to—and seeing him with a clear head doesn’t make him any less attractive.

Mixing business with pleasure has never been Damon’s style, and easily avoided, but the hotel he just bought comes with an unexpected perk—its manager. “Sensible” Kinsley today is as alluring as “impulsive” Kinsley was the night before, and she talks him into a deal. If she can turn around the hotel by the end of summer, he won’t tear it down to put up more profitable condominiums.

Their plan is simple…until falling for each other becomes more than they bargained for.

If you were to ask me to rate Bargaining with the Boss immediately after reading it, I would have given the book 3 stars. For me, that would have been an unfair rating. My low rating would have stemmed from the fact that I didn’t like the childishness of the heroine, Kinsley Roberts. However, part of that child-like behavior makes her pushy and determined. It’s that determination that drove the storyline.

After getting dumped by her fiance for being too “sensible”, Kinsley has returned to her hometown of Cape Harmony to manage her family’s hotel. The hotel means a lot to her and holds fun and cherished memories. Unfortunately, the hotel is in financial crisis and her brother is forced to sell it.

As a favor to a former college roommate and friend, Damon St. James agrees to have the St. James Corporation purchase the financially strapped hotel. The hotel is in desperate need of some TLC and a makeover; all of which requires cash that the hotel doesn’t have and Damon’s board may not approve. Even before meeting Damon, Kinsley is upset and believes the new owners plan on tearing down the hotel, thus making Damon public enemy number one. Over the course of a month, Damon and Kinsley work together and ultimately strike a deal that allows her the opportunity to make the hotel profitable. With the two already having an attraction to each other, their time together allows their personal relationship to grow. Things are looking good until Damon’s business rival steps into the picture. When all seems lost, Damon finds a surprising ally and finally opens up about his past.

I wanted to read Bargaining with the Boss because I loved the sound of the plot. With my initial misgivings aside, Jennifer Shirk has written a nice story with fun and playful characters. I didn’t expect to find myself laughing at some of the characters’ antics. I also didn’t expect to have my heart ache for the hero. I loved the ending, which had my heart doing little flips. If who I think is going to be the focus of the next book in the Accidentally Yours series, I’m definitely looking forward to reading it.